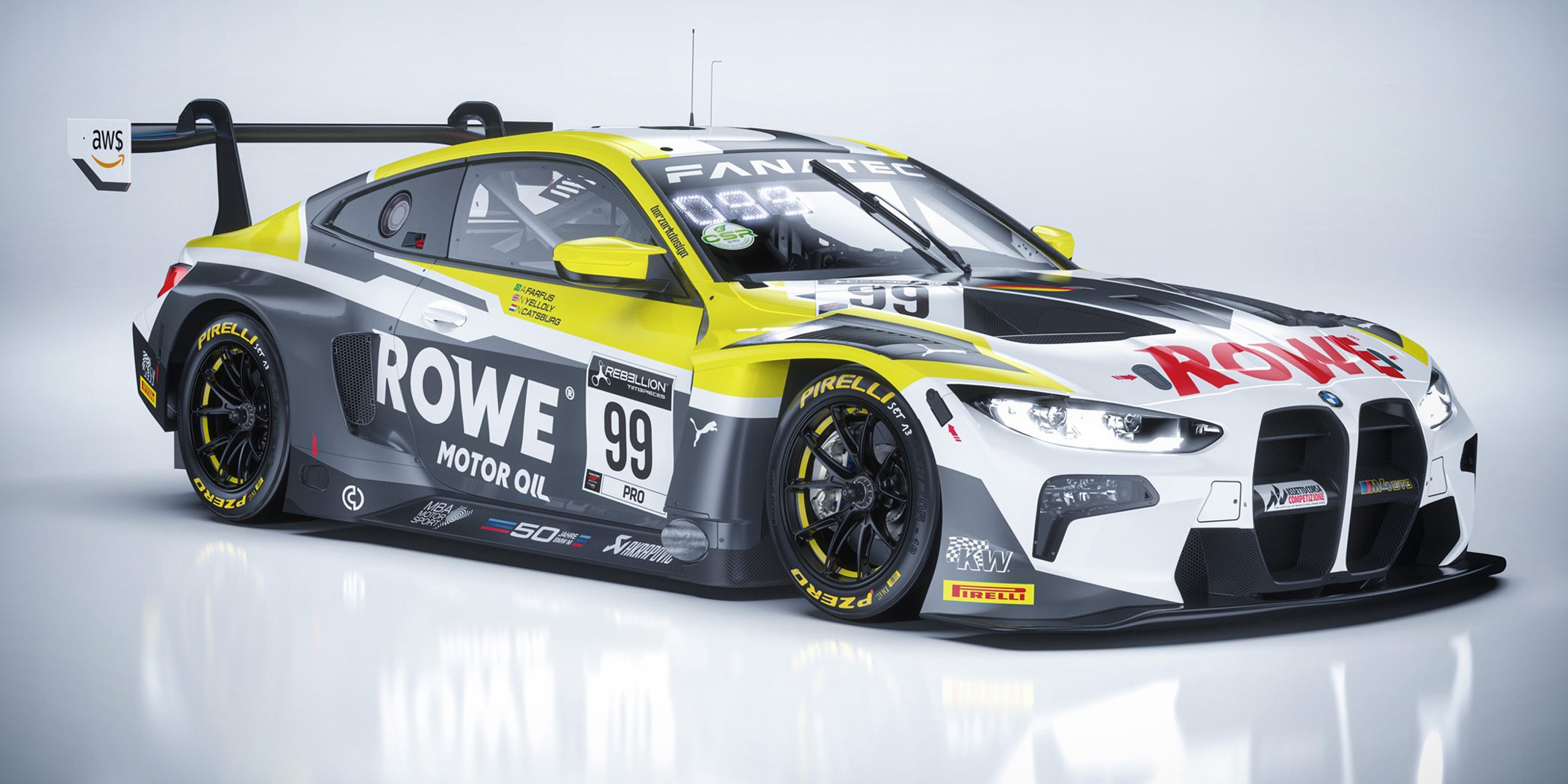 The perfect mix of experience and youth – that’s what the ROWE RACING driver lineup for the 2022 season of the GT World Challenge Europe looks like. It will be the first time with the St. Ingbert team for Brazilian Augusto Farfus and the BMW Junior Team with Brit Dan Harper, German Max Hesse and US American Neil Verhagen.

Augusto Farfus is well-known to BMW. Before his DTM career he drove for the Bavarian brand in the European and World Touring Car Championships. In 2010, he was the first‑ever Brazilian to win the Nürburgring 24 hours. In 2018, he won the FIA GT World Cup in Macau. His first outing for ROWE RACING in the #99 BMW M4 GT3 will be alongside Dutch Nick Catsburg and Brit Nick Yelloly, who both won the marathon in the Eifel mountains together with the team in 2020.

The sister #50 car – commemorative of the 50th anniversary of BMW M – is driven by the highly talented BMW Junior Team. For Dan Harper, Max Hesse and Neil Verhagen it will be the first full season in an international GT championship. “The term BMW Junior Team has become a legendary one, even outside of BMW M Motorsport. I am very pleased that we have been able to add new chapters to this legend since 2020,” said Franciscus van Meel, CEO of BMW M GmbH and one of the mentors of the current BMW Junior Team. “Dan Harper, Max Hesse and Neil Verhagen have performed impressively for the past two years and lived up to name ‘BMW Junior Team’. I am certain that they will cause quite a stir again this season at the wheel of the BMW M4 GT3.”

ROWE RACING will do the five long-distance races of the GT World Challenge Europe Endurance Cup. The season‑opener on 3rd April at Imola will be the team’s first race with the BMW M4 GT3. Highlight of the series are the Spa 24 hours on 30th/31st July.

Hans-Peter Naundorf, Team Principal ROWE RACING: “We are very happy to go into the 2022 season of the GT World Challenge Europe with such a strong squad of drivers. It is going to be an exciting year, with three very experienced BMW M works drivers in one car and the three guys from the BMW Junior Team in the other. That is a perfect mix. Nick Catsburg and Nick Yelloly have been among the guarantees of success for our team for a long time, and have emphatically demonstrated their class many times. Personally, I’m thrilled to be working with Augusto Farfus for the first time in our seventh year with BMW. His success and history with BMW speak volumes and I find it particularly interesting how he still goes about his work with so much joy and enthusiasm. We are very proud that BMW M Motorsport has entrusted us with accompanying the next step of the BMW Junior Team this year. We followed their positive development last year. They improved consistently and hardly made a mistake at the toughest racetrack in the world so the logical next step in their career is to move up into an international racing series.”

Augusto Farfus (#99 ROWE RACING BMW M4 GT3): “For me, 2022 will be a very important year. I’m very excited to be part of ROWE RACING in GT World Challenge Europe. The team has been among with the most successful GT3 teams in the market. I never had the chance to drive for them so I’m very happy to drive now. Our line-up is extremely strong. I think we have all the right cards to be strong.”

Nick Catsburg (#99 ROWE RACING BMW M4 GT3): “It’s super nice to be back with ROWE RACING in the GT World Challenge Europe. It’s high level and includes the 24 Hours of Spa which is obviously a flagship event that I want to win again. I’m very, very happy with the line-up. Nick Yelloly and Augusto Farfus are two drivers I rate very highly. The last time I drove with Augusto I won the Intercontinental GT Championship, and with Nick Yelloly I won the Nürburgring 24 hours. We are ready for some success.”

Nick Yelloly (#99 ROWE RACING BMW M4 GT3): “The GT World Challenge Europe actually is where I did my first races for BMW M Motorsport back in 2018 when I raced with ROWE RACING at Silverstone and Paul Ricard. I’m really looking forward to being back in that championship and to get going with my team‑mates Nicky Catsburg and Augusto Farfus, obviously two super‑fast racing drivers. I also can’t wait to tackle the 24 Hours of Spa, a race that I haven’t won and that I want to win. ROWE RACING has won it before so let’s see what we can do there.”

Dan Harper (#50 ROWE RACING BMW M4 GT3): “In the GT World Challenge Europe, I will get to know five circuits that are totally new to me. I am really looking forward to that. The 24 Hours of Spa will obviously be a highlight, and it is great to be working with such an experienced and winning team there as ROWE RACING. Lining up against three experienced BMW M works drivers in the same team will be a very special challenge.”

Max Hesse (#50 ROWE RACING BMW M4 GT3): “Our third year as the BMW Junior Team is going to be exciting, as a new car and a new race schedule await us. We have already gained some initial experience of the BMW M4 GT3 and are currently in Viareggio preparing for the start of the season. I’m really looking forward to working with our new partner team ROWE RACING and, of course, to the races in a fantastic series like the GT World Challenge Europe. We really wanted to race in this series. Thank you to BMW M Motorsport for the faith they are putting in us!”

Neil Verhagen (#50 ROWE RACING BMW M4 GT3): “We have been preparing intensively, both physically and mentally, for weeks now, in order to be top-fit come the start of the season. We can now hardly wait to get back out on track for the first tests. The GT World Challenge Europe with ROWE RACING is going to be a fantastic new experience for us. We are learning new racetracks and will go wheel to wheel with the best GT drivers in the world. I am sure we will learn an awful lot there.”

ROWE RACING bids farewell to the BMW M6 GT3 at the Norisring
5. October 2021
Go to Top