Eight top-class BMW M works drivers: ROWE RACING to line up in the “Green Hell” with a heavenly good package 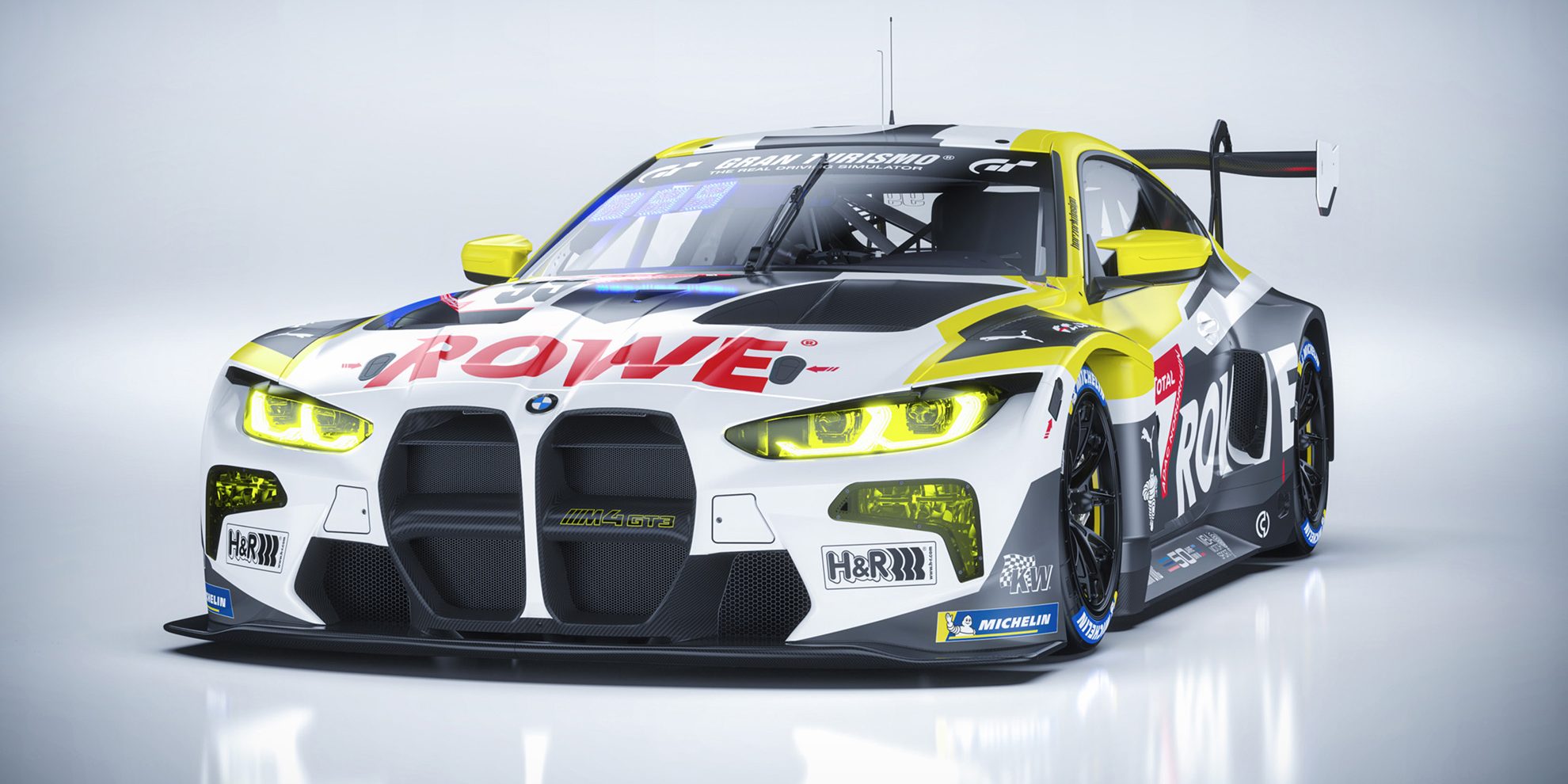 Eight top-class BMW M works drivers: ROWE RACING to line up in the “Green Hell” with a heavenly good package

Augusto Farfus to make his first appearance on the Nordschleife with the team from St. Ingbert / The drivers have four victories and ten podium places between them at the ADAC 24h race

Two new BMW M4 GT3 and eight top‑class BMW M works drivers: ROWE RACING lines up in the “Green Hell” with a heavenly good package. The team from St. Ingbert is looking to finish on the podium for the third time in a row in the 50th staging of the ADAC 24h race at the Nürburgring, which takes place on 28th and 29th May. After the team’s maiden victory in the “Eifel Marathon” in 2020, ROWE RACING finished runner‑up last year, missing out on back‑to‑back wins by just 8.8 seconds having started the iconic race from pole position for the first time.

While the two BMW M4 GT3 #98 and #99 are brand new and will tackle the 24‑hour marathon on the most demanding racetrack in the world for the first time, ROWE RACING is looking to continuity and experience when it comes to the driver line‑up. The only new addition to the team is Augusto Farfus. The experienced driver replaces former DTM champion Martin Tomczyk, who has called time on his career as a professional racing driver. The eight BMW M works drivers in action for ROWE RACING already have four victories and ten podiums between them in the ADAC 24h race. As well as taking overall victory in 2020 and two second places in 2017 and 2021, the team from St. Ingbert also finished third in 2013 and 2014.

“Gustl” Farfus, who in 2010 became the first Brazilian to win the ADAC 24h race and this year lines up for ROWE RACING in the GT World Challenge Europe, will share the #99 BMW M4 GT3 with Britain’s Nick Yelloly, Connor De Phillippi from the USA, and ROWE RACING institution Philipp Eng from Austria. Nick Yelloly, who secured pole position last year, was part of the winning ROWE RACING crew in 2020. Philipp Eng started that race in two cars, and had to withdraw from the victorious car during the race for tactical reasons. Connor De Phillippi won the “Eifel Marathon” in 2017 before switching to BMW, and finished runner‑up last year in the #98 car.

The fourth Nürburgring winner in the ROWE RACING line‑up is Nick Catsburg. The Dutchman, who won in 2020 and was also instrumental in the team’s second place in 2017, will this year drive the #98 car. Nick Catsburg will share the driving duties with two-time DTM champion Marco Wittmann from Germany and South African Sheldon van der Linde, who last year started in the DTM for ROWE RACING. Both finished runner‑up in 2021. The fourth man in this crew is John Edwards from the USA, who switches from the #99 to the #98 car, swapping places with compatriot Connor De Phillippi.

“The 24h race at the Nürburgring is a race that sets the pulse of any motorsport enthusiast racing. As such, we are all really looking forward to this classic,” Head of BMW M Motorsport Andreas Roos says. “During the development of the BMW M4 GT3, we gained an awful lot of experience with the car on the Nordschleife. That will now be very valuable to us in the preparations and the race. Our BMW M Motorsport works drivers are real Nordschleife experts, as is ROWE RACING. As such, we have all the ingredients in place to go into this iconic race with a healthy portion of optimism.”

In preparation for the 50th ADAC 24h race at the Nürburgring, ROWE RACING will contest two races in the Nürburgring Endurance Series (9th and 23rd April), as well as the new 24h Qualifiers, with a further two races (7th/8th May).

Hans-Peter Naundorf, team principal ROWE RACING: “In our seventh year with BMW M Motorsport, we are taking on the battle on the Nordschleife once again. We are proud to be continuing this partnership and to run the new BMW M4 GT3. We have been very successful in the ADAC 24h race for the past two years, and obviously hope we can back that success up with the new car. To achieve this, BMW M Motorsport has allowed us another fantastic driver line‑up this year. We are thrilled to be working with these top drivers. It is a great privilege and not one that we will be taking for granted. We will do everything we can to repay that faith.”

Nick Catsburg (#98 ROWE RACING BMW M4 GT3): “It is super nice to be back with the ROWE RACING guys and the team I have won with the 24h race in 2020. This race is my favourite event of the season. I think we have an amazingly strong line-up over both cars with a lot of experience there. To work with the team also in GT World Challenge Europe is going to be a good preparations for this event. Obviously it’s kind of different to the last year with the BMW M6 GT3 because we don’t have any real experience with the BMW M4 GT3 at the Nordschleife. But I am sure we all be up for the challenge and I am looking forward to it.”

John Edwards (#98 ROWE RACING BMW M4 GT3): “I am thrilled to do with our brand new BMW M4 GT3 the most intense race on earth: the 24 hours Nürburgring. There’s nothing like a 24-hour race at the most challenging and rewarding track on earth. Last year we had a good car but some bad luck put us out. This year we have a new car and I am very confident.”

Sheldon van der Linde (#98 ROWE RACING BMW M4 GT3): “Really looking forward to being back with ROWE RACING for the second year in a row at the 24h race at the Nürburgring. I know the team pretty well from DTM last year so we start from a very good level. And I am obviously very much looking forward to my new driver line‑up which has changed slightly since last year with John and Nicky on board. I’ve never shared a car with them before so that will be pretty cool! We are going to be looking to use all of the experience between us four to convert it into a clean and fast race. I am especially looking forward to the first year with our new car in the BMW M4 GT3. I have done a few tests around there and the car feels extremely good. I am looking forward to seeing how it performs under race and less favourable conditions in true Nordschleife fashion. I have finished on the podium twice in the last two years with a 3rd and then 2nd last year so fingers crossed it’s a third time lucky for the top step.”

Marco Wittmann (#98 ROWE RACING BMW M4 GT3): “I have driven for ROWE RACING in the 24h race for many years, and am now looking forward to the first start with the BMW M4 GT3 on the Nordschleife. We hope to be able to get the car working at its best quickly during the preparatory races and then in the race itself. I am excited. Our driver line‑up in the two cars should be very good, and I hope we will be successful.”

Connor De Phillippi (#99 ROWE RACING BMW M4 GT3): “Returning back to the Nürburgring in the new BMW M4 GT3 is going to be a major highlight in my 2022 season and I am so excited to be a part of the program. It is my favourite event of the year with one of the most unforgettable racing atmosphere’s and I cannot wait to be back driver there with ROWE RACING. Being back in Europe alongside racing full-time in IMSA is the perfect race schedule. I’m ready for some wins!”

Philipp Eng (#99 ROWE RACING BMW M4 GT3): “I am delighted to be driving for ROWE RACING again. I have been involved with the team at the 24h race since 2016 and hope that this year will finally produce a win or a podium for me. I think we are very well positioned, with the team, car and drivers that we have. I drove two test races with the BMW M4 GT3 last year, races seven and eight of the Nürburgring Endurance Series. The car was very good, and I am confident that the team will exploit its full potential.”

Augusto Farfus (#99 ROWE RACING BMW M4 GT3): “Driving for ROWE RACING does not need much of explanation. It is a winning team with a winning DNA. I always wanted to drive for the team but it never really got work but this year it is a full program. The team has a lot of success, it won the 24h race at Nürburgring. Looking to the drivers of the team I think we definitely have one of the strongest packages out there together with the brand-new BMW M4 GT3. My main target is to get to know the team as quick as possible and to get up to speed and to show up at the Nürburgring as strong as we can.”

Nick Yelloly (#99 ROWE RACING BMW M4 GT3): “I am excited to get back to the Nordschleife with ROWE RACING. It is my favourite circuit and the 24h race is without a doubt my favourite event. I love the atmosphere. We won it in 2020, I was on pole in 2021 but unfortunately had problems in the race so we have to make sure we will be back at the front this year with our new BMW M4 GT3.”

No happy ending for ROWE RACING at the season finale at the Norisring
10. October 2021
Go to Top