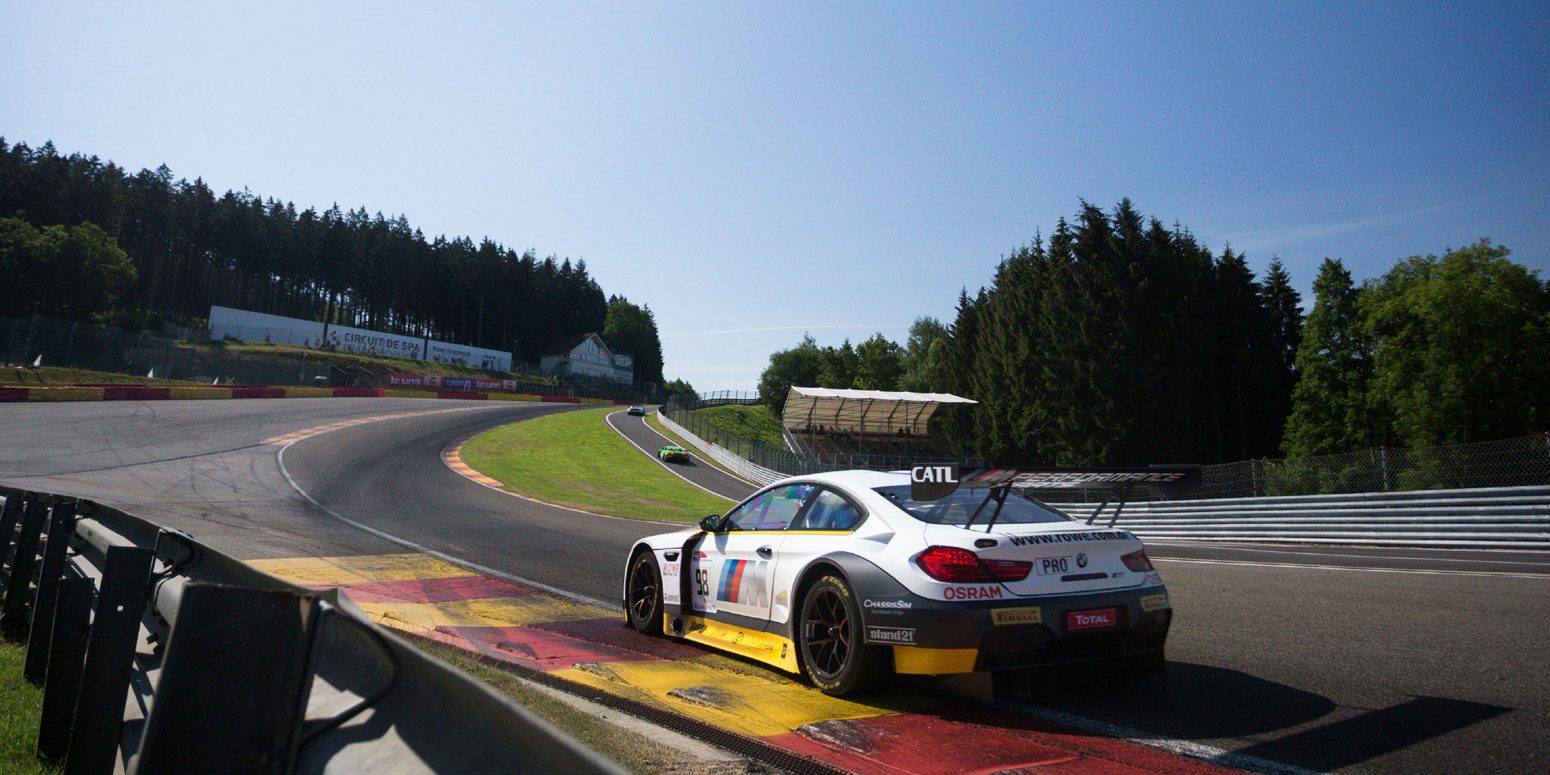 St. Ingbert, 18th July 2018 – The anticipation is rising: The 70th staging of the iconic 24 Hours of Spa on 28th/29th July marks the second major highlight of the season for ROWE RACING. After a disappointing ADAC 24h Race at the Nürburgring, the St. Ingbert team is looking to make amends on the rollercoaster circuit in the Belgian Ardennes and is dreaming of adding a second win to the 2016 victory. During two successful days of testing at the 7.004-kilometre Formula 1 circuit solutions were found for a number of problems that arose in recent races and a good basic set-up was established for the two BMW M6 GT3. ROWE RACING heads to the highlight of the Blancpain GT Series Endurance Cup with plenty of confidence and fresh momentum.

Having said all that, the team faces the toughest of competition in this legendary race, which boasts arguably the strongest field in GT racing. ROWE RACING and its partner BMW Motorsport, who are looking for their 24th overall victory at Spa, will lock horns with twelve other manufacturers – more than ever before in the GT3 era. In total, 68 cars will compete on the iconic track featuring famous high-speed corners such as Eau Rouge and Blanchimont, which are guaranteed to put a smile on any driver’s face and to make the hairs on the back of their necks stand up.

It goes without saying that the six BMW works drivers who will share the cockpits of the two ROWE RACING cars are also really looking forward to the challenge at Spa – a challenge that Finland’s Jesse Krohn and BMW Motorsport Junior Ricky Collard from Britain will be facing for the first time in their fledgling careers. Two-time DTM champion Marco Wittmann, who will alternate at the wheel of the #98 BMW M6 GT3 with Krohn and Collard, will also be making his debut at the 24 Hours of Spa. However, the German does know the circuit from his early years in Formula BMW, when he actually won at Spa.

In contrast, ROWE RACING is sending two former Spa winners into action in the #99 car. Britain’s Alexander Sims was part of the trio that achieved the biggest success in the history of the St. Ingbert team in 2016 while Dutchman Nick Catsburg won the race in 2015. They share the cockpit with Germany’s Jens Klingmann, who is a ROWE RACING regular in this season’s Blancpain Endurance Series.

The race week in Spa traditionally gets underway on Wednesday evening (25th July) with the parade of cars from the racetrack to the centre of Spa, where there will be an autograph session and the driver briefing, before the entourage returns to the track. Practice sessions and qualifying sessions are scheduled for Thursday (26th July), then a warm-up and the Super Pole will take place in the late afternoon on Friday (27th July). The race gets underway on Saturday (28th July) at 4:30 p.m. CEST. This year, a total of 68 GT3 cars representing 13 different manufacturers will be in action.

Hans-Peter Naundorf, Team Principal ROWE RACING: “The 24 Hours of Spa is our second highlight of the year. After the set-backs at the Nürburgring, we are looking forward to really going for it and banishing the memories of that disappointment. Our whole team is really motivated and the preparations for Spa have been very focussed. The findings from the two test days have been positive and once again confirmed that this circuit suits our BMW M6 GT3. We hope that this time, after all our hard work, we get that little bit of luck you need to be challenging at the head of this high-class field after 24 hours of racing. We are really looking forward to the biggest GT3 race in the world and the very special atmosphere at this wonderful racetrack.”

Marco Wittmann, #98 ROWE RACING BMW M6 GT3: “I have wanted to contest the 24 Hours of Spa for many years, but it hadn’t ever worked out until now. It’s been ten years since I last drove at Spa – back then it was with Formula BMW, in which I also won at Spa. I like the track, it is a beautiful natural racetrack, and there aren’t many of them around these days. I’m really looking forward to working with ROWE and my team-mates for this classic. Naturally, the goal is to be up there at the front. A podium – or a win – at such an iconic endurance race would be fantastic. The competition is great, and there are a lot of GT3 cars driving for the win, but I’m definitely really looking forward to it.”

Jesse Krohn, #98 ROWE RACING BMW M6 GT3: “Spa will be really special for me as it will be my debut in the Spa 24-hour race. It is something I have been looking for for years. I am going there with ROWE and such a strong line-up, so it will be great. The races leading up to Spa have been progressive for us, the team has done a great job and we were making big steps with the car. I am sure we can be optimistic about the weekend.”

Ricky Collard, #98 ROWE RACING BMW M6 GT3: “Spa is the big one and definitely the highlight of the season. It will be my first 24-hour race in the BMW M6 GT3 and I am really excited about it. I did two 24-hour races in the BMW M4 GT4 – at the Nürburgring and Dubai. They went really well and I am looking forward to Spa. I think that our package for the BMW M6 GT3 is very strong.”

Nick Catsburg, #99 ROWE RACING BMW M6 GT3: “The 24-hour race in Spa is always a highlight of the season. I have always loved the track and, after winning in 2015, the event has become very special to me. The BMW M6 GT3 won in 2016 and in 2017 we were also performing pretty well before we had some issues. This year I feel that we have the car, we have a very experienced team and I have very strong team-mates. With this package, I hope that we will be in the mix for the podium. I am really looking forward to the event. Also, the parade in the town makes Spa very special – and to be honest, I can’t wait for the event to begin.”

Jens Klingmann, #99 ROWE RACING BMW M6 GT3: “The 24 Hours of Spa is one of the absolute highlights on the calendar, for both me and BMW Motorsport. In my eyes, it is the most difficult 24-hour race in the world, because there are 50 to 60 GT3 cars on the track all at the same time. Since they are all in the same class, theoretically they could all compete for the overall win. The field is extremely strong. It is also a very demanding track for man and machine. So, the challenge is great, but we are well prepared. I am really looking forward to the race and hope that we can get another win for BMW Motorsport.”

Alexander Sims, #99 ROWE RACING BMW M6 GT3: “I am really excited to go back and attack the 24-hour race again. I won it in 2016 and that was just the most amazing experience for me. It’s my third time there with ROWE so I know the team very well. This year I have new team-mates with Nick Catsburg and Jens Klingmann. I am looking forward to working together and trying to achieve the best result possible for BMW. They had some good success in recent years with the BMW Z4 GT3 and the BMW M6 GT3. Now we are trying to continue that.” 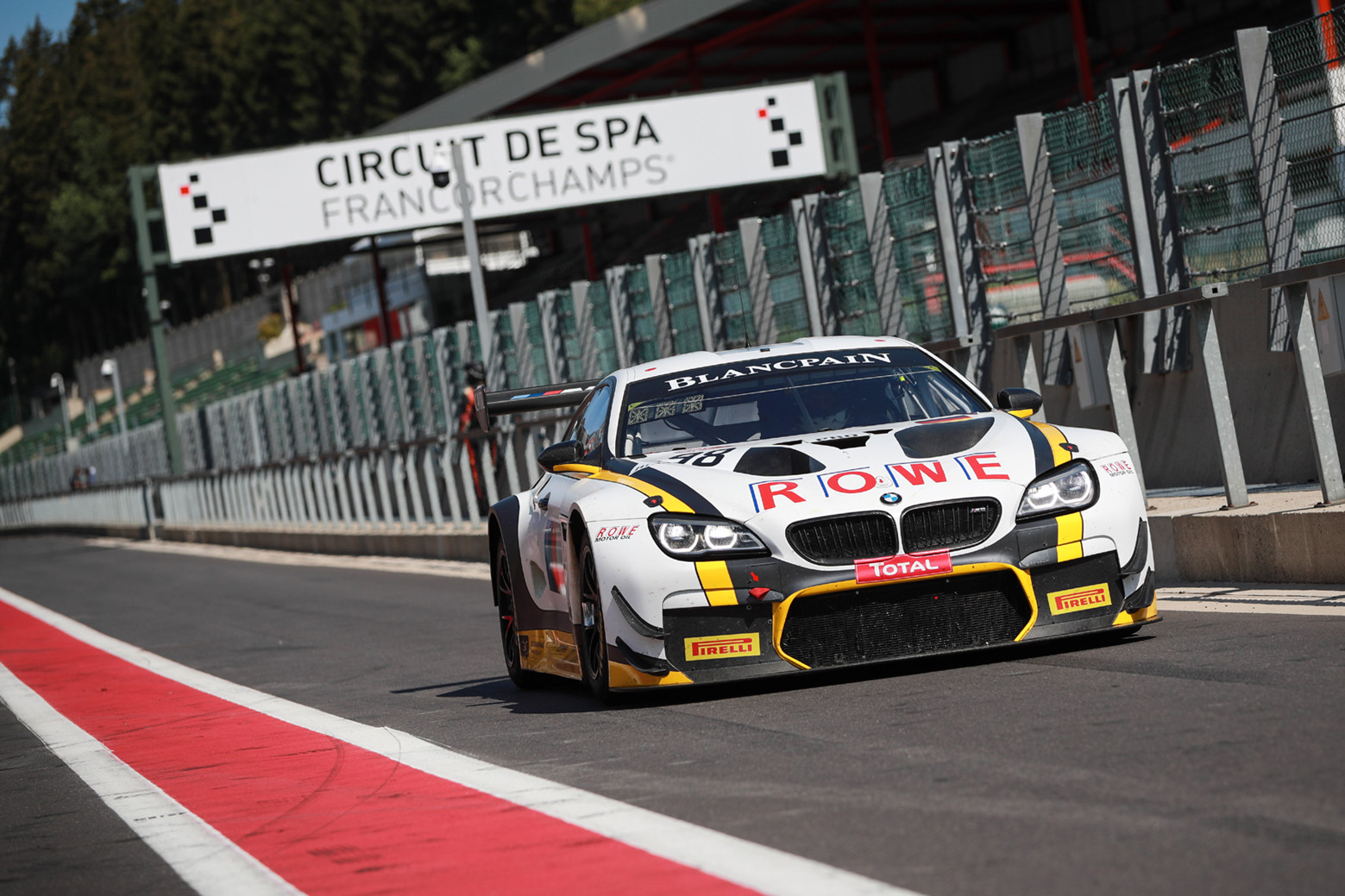 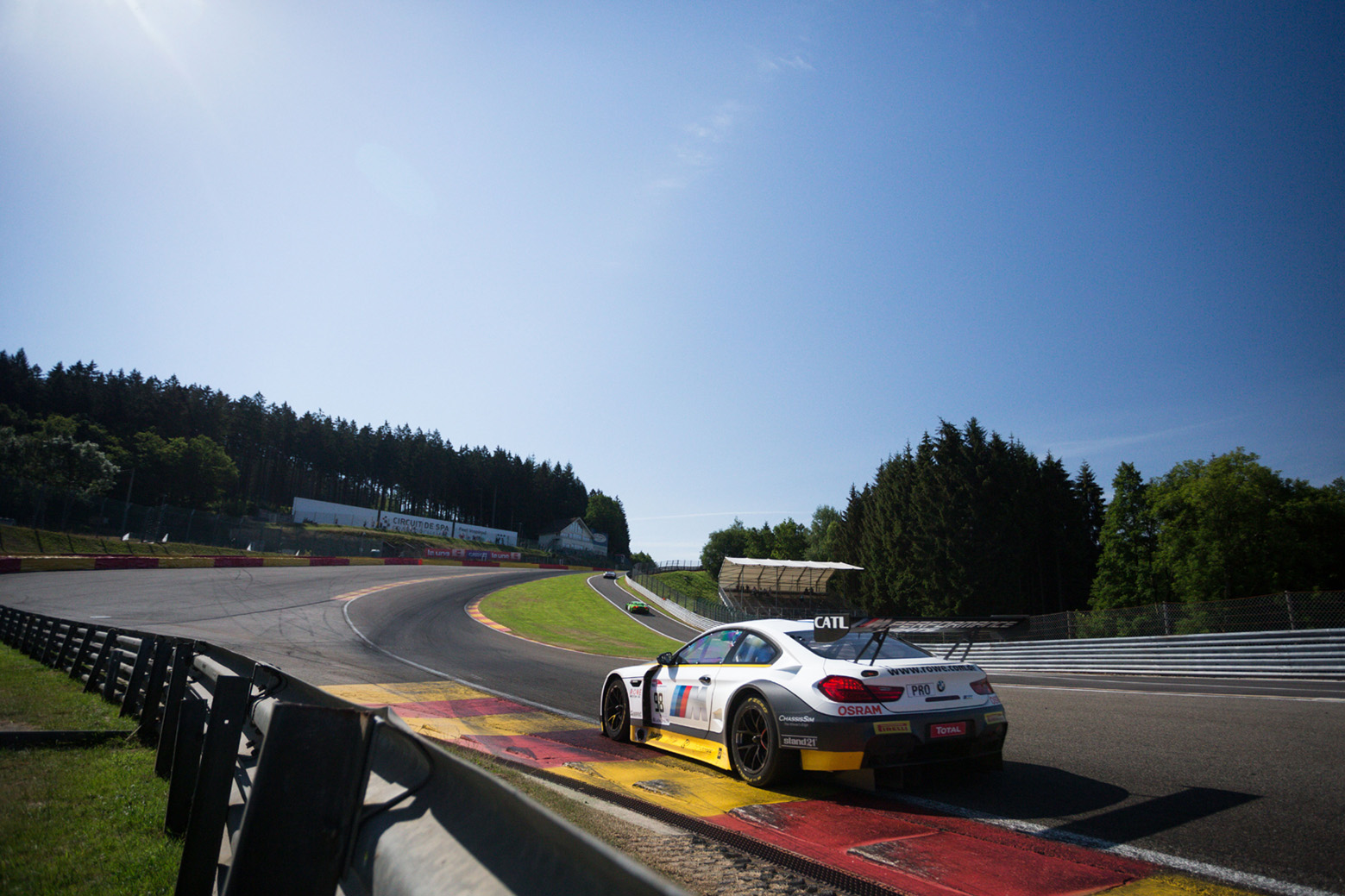 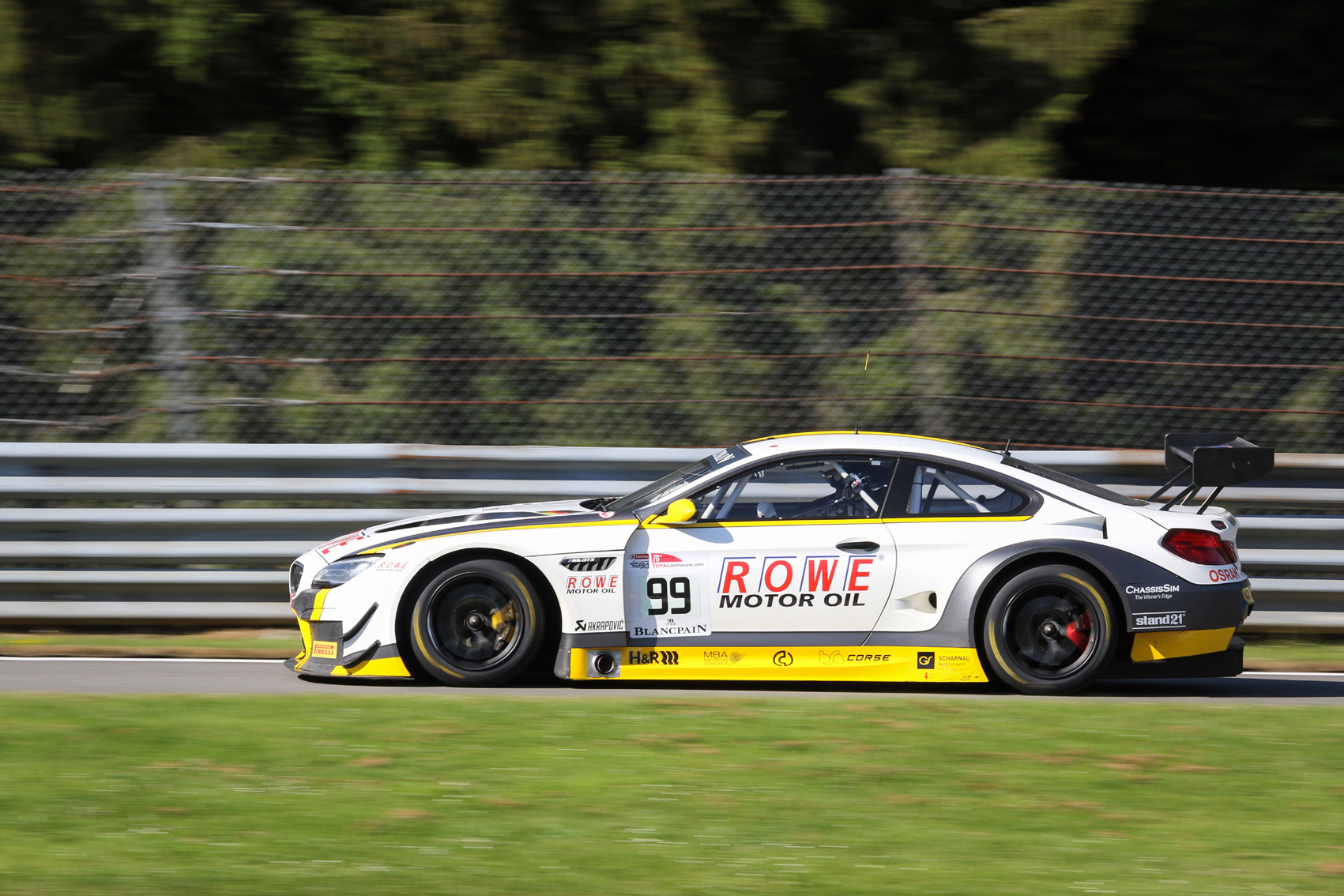