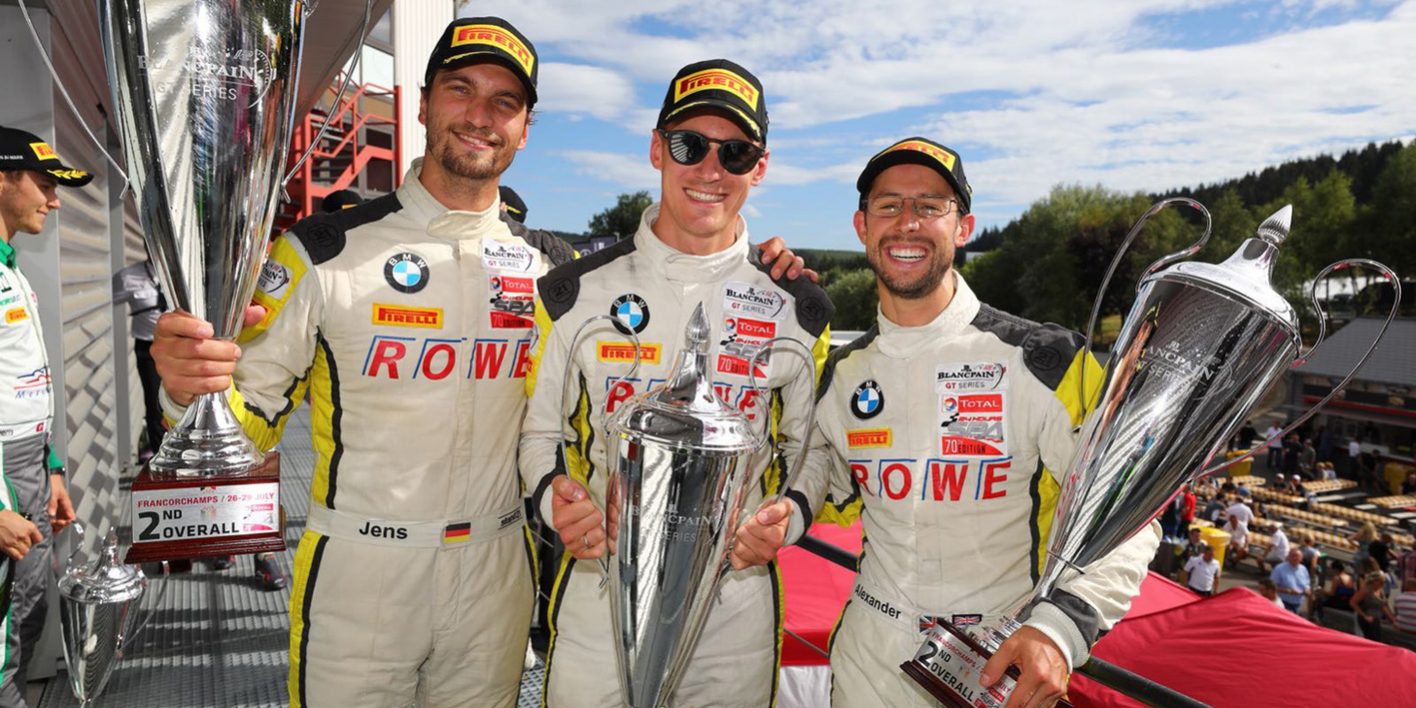 After an impressive performance, #99 finishes just 10.4 seconds away from a second success after 2016 / Sister car retires due to a technical issue

St. Ingbert, 29th July 2018 – ROWE RACING returned to the podium at the 70th edition of the 24 Hours of Spa, finishing second after a valiant performance and missing out on a second triumph at the world’s largest GT3 race by just 10.4 seconds. British driver Alexander Sims, part of the victorious trio of drivers for the St. Ingbert team two years ago, Dutchman Nick Catsburg and Germany’s Jens Klingmann drove a flawless race on the famous roller-coaster racetrack in the Belgian Ardennes, completing 511 laps or 3,579.05 kilometres on the 7.004-kilometre Formula 1 circuit.

Just as at the successful race in 2016, the #99 ROWE RACING BMW M6 GT3 had started the highlight of the Blancpain GT Series from 11th place after a demotion, before improving gradually to move up through the field and take the lead after around 15 hours of racing. The driving trio then battled to claim victory right up to the bitter end, as the lead position changed hands between a total of five cars. In the final two hours of the race, it came down to a battle with the Walkenhorst team BMW M6 GT3, but despite his best efforts Sims was unable to catch his former team-mate Philipp Eng. After crossing the line, Sims was first to congratulate the Austrian driver with whom he shared victory for ROWE RACING in 2016.

This one-two result was the 24th overall win for BMW Motorsport at Spa, making BMW Motorsport Director Jens Marquardt a proud man: “After 2016, this was the second time that the BMW M6 GT3 proved unbeatable at the world’s largest GT race. This 24th triumph has cemented our position as the most successful manufacturer by far at the 24-hour race in Spa,” said Marquardt: “The fact that Jens Klingmann, Alexander Sims and Nick Catsburg also reached the podium, finishing second in the ROWE RACING BMW M6 GT3 and completing a one-two result, makes the 70th edition of the 24-hour race in Spa just perfect.”

The 70th edition of the classic race was not short of excitement and drama. Numerous incidents, as well as full-course yellow flag and safety car periods, tested the nerves of every participant. The race was interrupted for two hours during the night, while the track was cleaned and the crash barriers repaired after a serious accident at the famous Eau Rouge corner.

The #98 car was also competing for ROWE RACING but did not share the luck enjoyed by its stablemate. Two-time DTM champion Marco Wittmann from Germany, the British BMW Motorsport Junior Ricky Collard and Finland’s Jesse Krohn were all competing in the 24 Hours of Spa for the first time. After starting well from 27th position, they were able to move up to eleventh after a safety car period with three hours on the clock. The trio then continued to record good times, moving up to the leading group and reaching second place. However, a technical problem after 194 laps meant that the BMW M6 GT3 had to head for the pits from fourth place. There was no chance of a quick fix and the debutants had to end their race there.

Hans-Peter Naundorf, ROWE RACING team principal: “Firstly, I would like to congratulate the Walkenhorst team. They performed just that bit better than we did here. Our team did a great job. We couldn’t have asked any more of the team and the drivers. This was the toughest 24-hour race we have ever been involved in. The current format means that it is a 24-hour sprint race right at the limit. This is an extremely intense and exhausting event and we would have loved to have crowned it with a win. However, if you finish the toughest GT3 race in the world by reaching the podium, you should accept that you didn’t do much wrong and be happy with that. In the final reckoning, a minor problem with the refuelling system during the first pit stop for #99, which cost us 20 seconds, may also have cost us the win. But we can be very proud of the fact that we have reached the podium in one of the two major 24-hour races in three consecutive years with the BMW M6 GT3. Today’s result is great for BMW and by some distance the best result for the BMW M6 GT3 since it started competitive racing two-and-a-half years ago. It’s a shame that the guys in #98 had to retire from such a promising position due to a technical issue. The repairs would have taken too long. All three drivers did a good job in their first 24-hour race in Spa.”

Jens Klingmann, #99 ROWE RACING BMW M6 GT3: “I think that second place was the best we could have achieved. I am particularly happy for the BMW family. First and second for BMW Motorsport– who would have thought we would manage that before the race? This is the toughest GT race in the world, and we can all be proud of our achievement. To be honest, we had no chance against the #34 BMW. They were faster than us from the first practice session. We simply have to accept that and salute their achievement.”

Alexander Sims, #99 ROWE RACING BMW M6 GT3: “I’m very pleased being back on the podium. I won it with Maxime and Philipp two years ago. I’m very, very proud of the whole ROWE RACING guys and BMW Motorsport. They did an awesome job with this 1-2. It’s a shame it wasn’t the first place for us but I’m very, very pleased with second place and proud on what we achieved.”

Marco Wittmann, #98 ROWE RACING BMW M6 GT3: “We had a good start to the race. We got a bit lucky, but we also made really good strategy calls under full course yellow to move from 27th to second position, so it was a really good job from the team and the drivers. It’s a shame because just before we had the issue, the car was the fastest on track. That’s the sport sometimes, it can be hard to swallow. The positive is that we made a big step forward between practice and the race, the race pace was excellent.”

Jesse Krohn, #98 ROWE RACING BMW M6 GT3: “I have mixed feelings. I am really happy for BMW for the one-two win and for my team to finish second. But on our side, we didn’t have the luck. We had a great run and the team had a great strategy putting us from 27th on the grid to second place before the issues. We would have been just getting to the point of the race that would have been strong for us so it’s really a shame that we were denied the chance to fight for the win.”

Ricky Collard, #98 ROWE RACING BMW M6 GT3: “It’s a massive shame. We had some really, really good stints and a great pace – just before the retirement, we were the fastest car on track. The steps forward we’ve made this year have been massive. It was my first 24-hour race in a GT3 car, and for a long time it was going really well.” 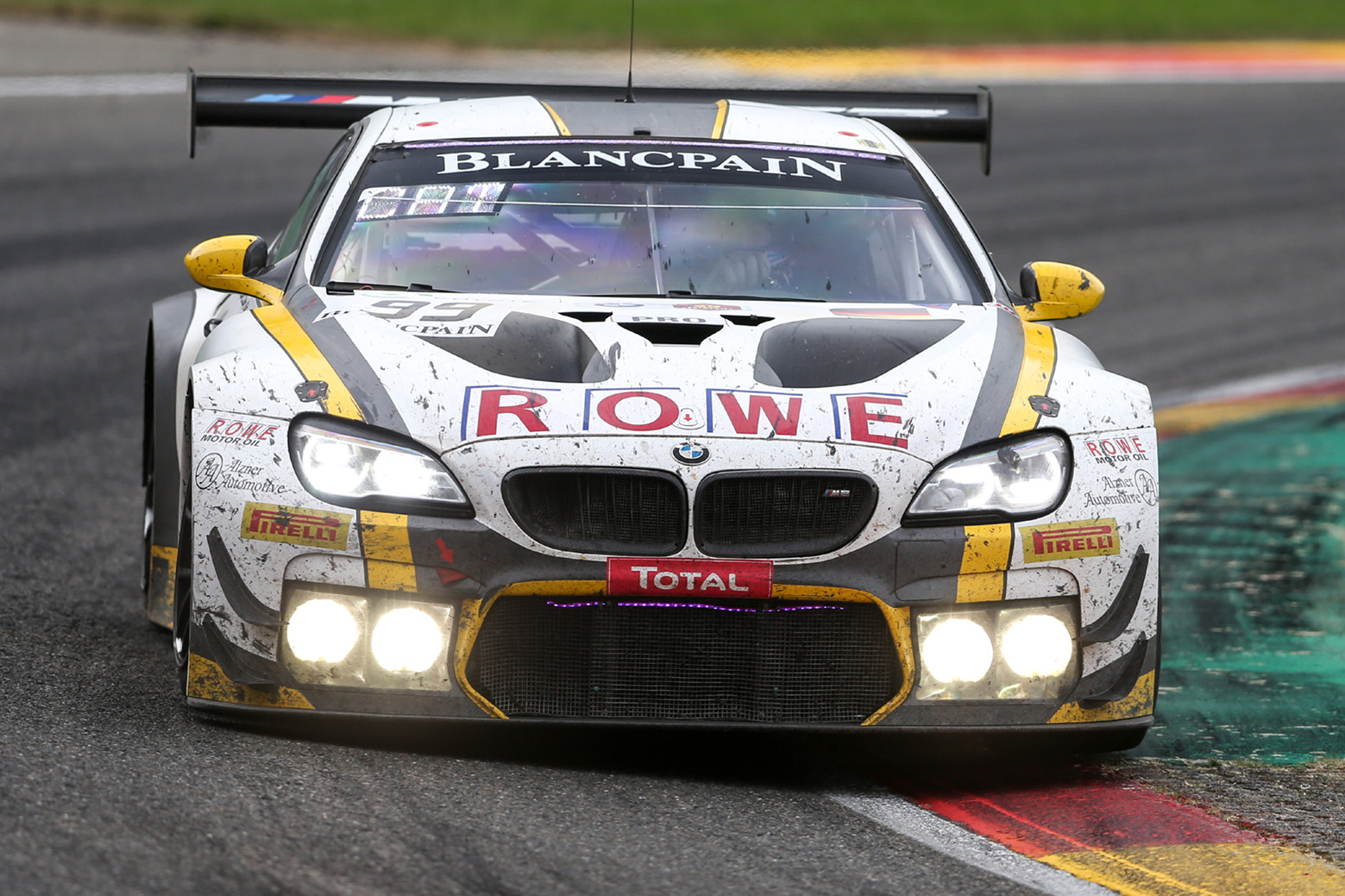 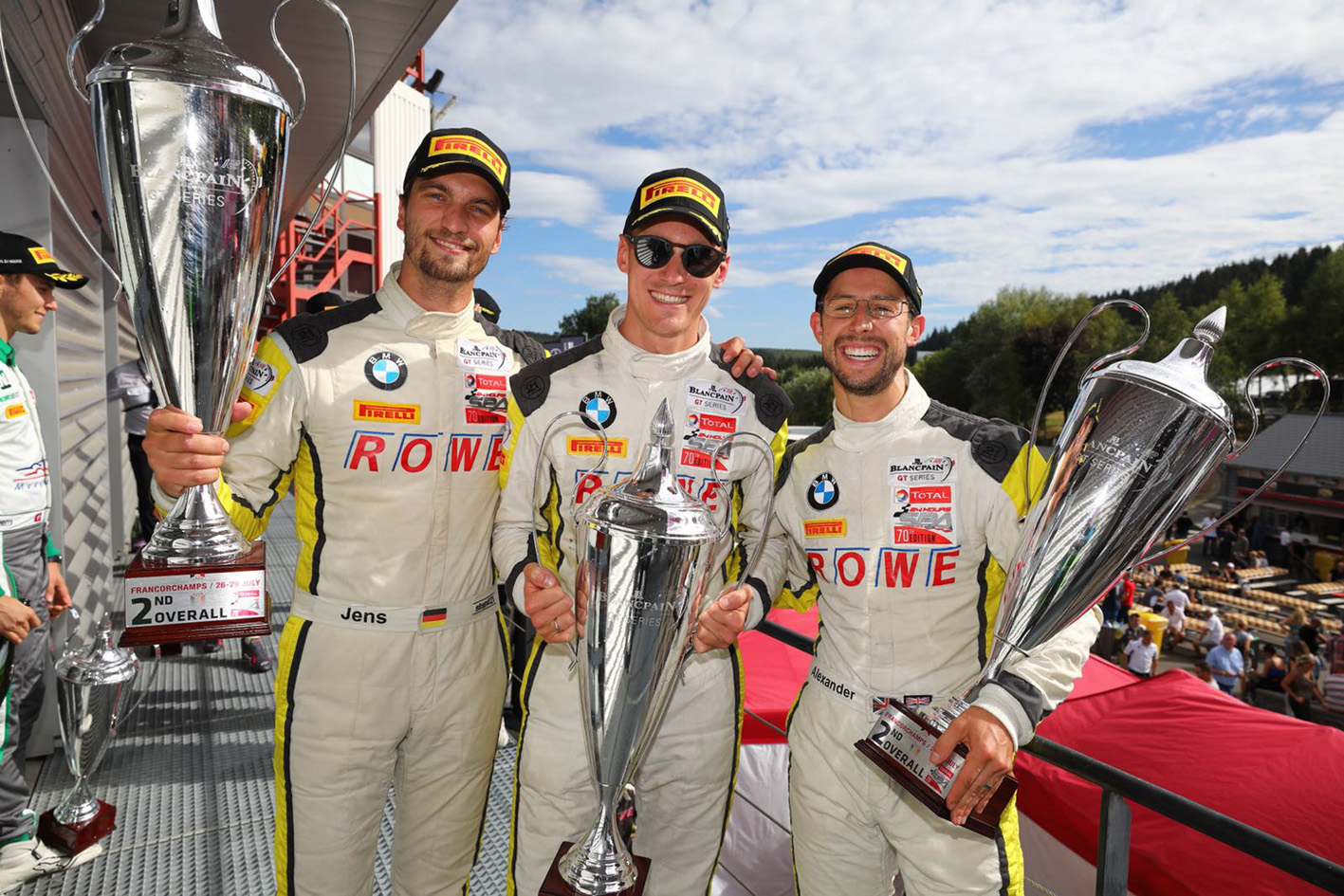 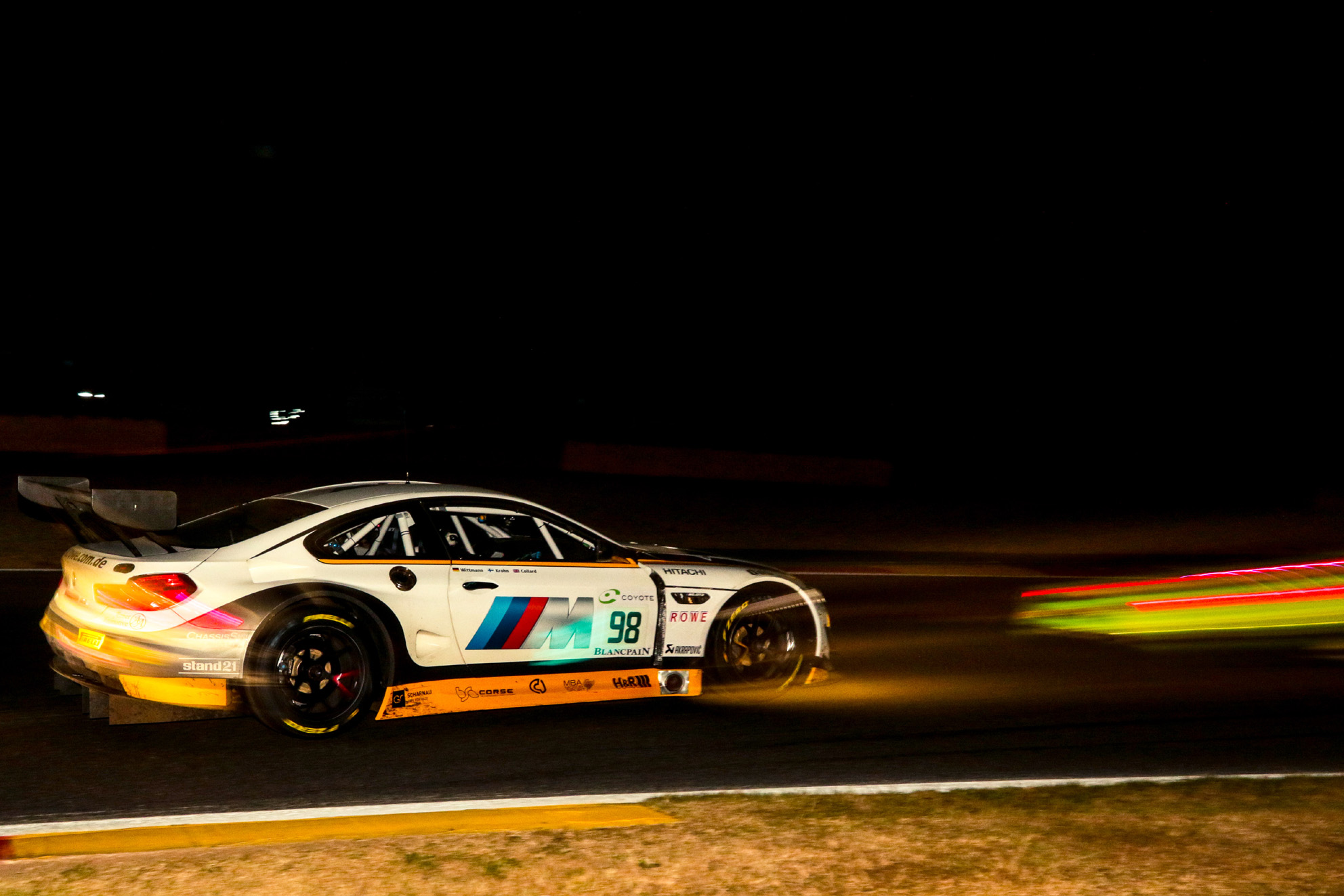