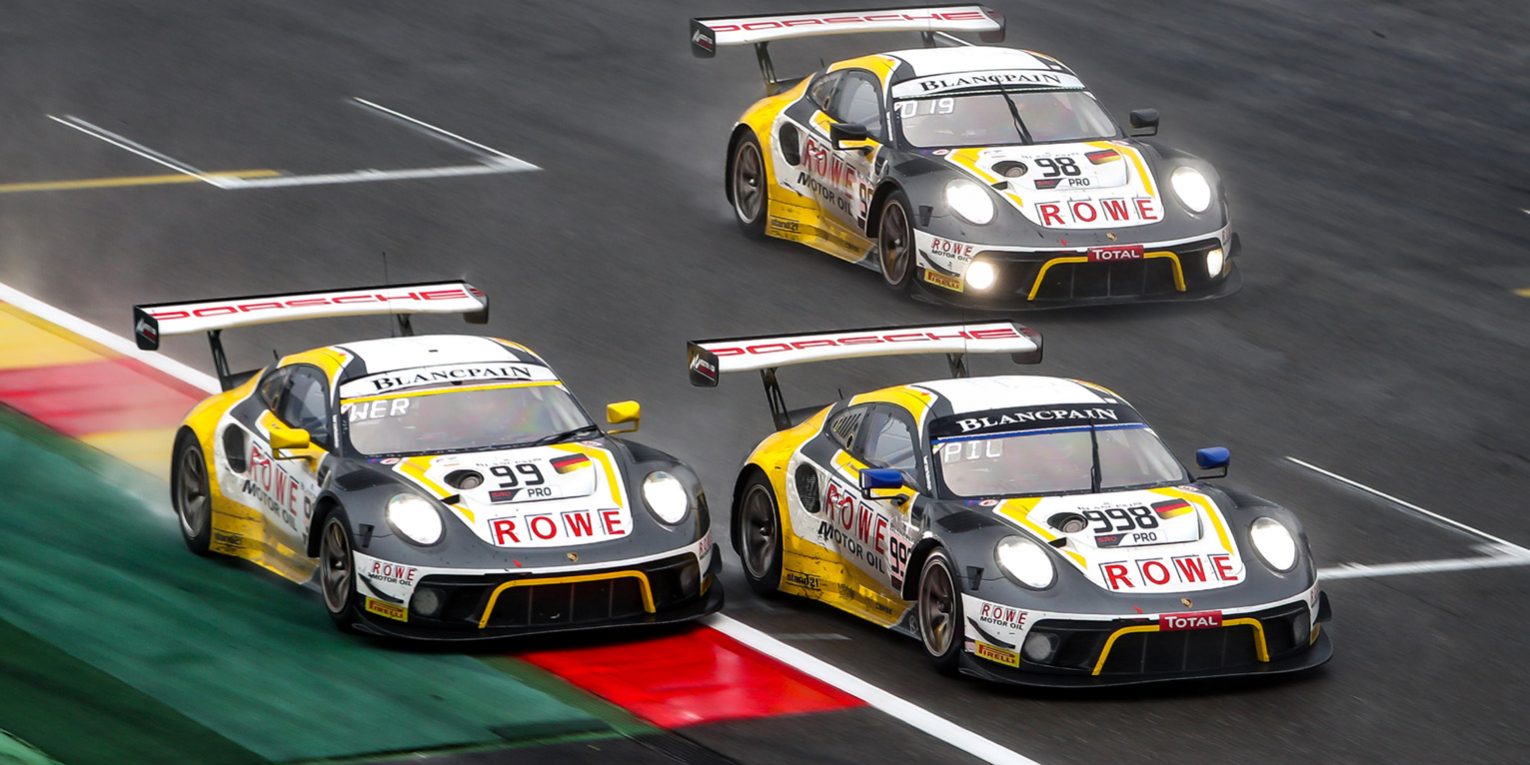 St. Ingbert, 28th July – ROWE RACING has claimed second place at the legendary 24 Hours of Spa for the second year in a row. After a tough battle with the competition, and with the forces of nature in the Belgian Ardennes, the three Porsche works drivers Nick Tandy (Great Britain), Frédéric Makowiecki and Patrick Pilet (both France) were subjected to a rollercoaster of emotions after a wonderful chasing performance saw them just 3.3 seconds away from recording a second victory for the team after 2016. In the #998 Porsche 911 GT3 R, the trio completed a one-two result for Porsche and spearheaded a superbly successful performance for the team. After 24 hours of extremely adverse weather conditions and a race interrupted for nearly six hours on Sunday morning, the #98 and #99 cars also competing for ROWE RACING crossed the finishing line in fifth and seventh positions.

The pouring rain on Saturday afternoon meant that the race had to start behind the safety car. The #998 car started from fourth on the grid and was involved in the battle for the lead, before surrendering first place after a drive-through penalty for an infringement in one of the many full-course yellow and safety car phases pushed it back to 45th place after around four hours.

Then it was time for Le Mans winner Tandy and the two fast Frenchmen Makowiecki and Pilet to put on an impressive chasing performance to mark their race debut in ROWE RACING colours. The #998 car was consistently the fastest on the track, particularly during the night and even as the weather conditions became ever more extreme. After 180 laps, the #998 car returned to first place, but then the entire field came to a standstill early on Sunday morning after even heavier rain rendered the circuit impassable. The race was interrupted for around six hours, restarting on Sunday at 11:30 – providing more spectacular action.

Regular incidents necessitated full-course yellow and safety car phases, but final driver Tandy stayed calm. An hour before the end of the race he produced a spectacular overtaking manoeuvre to move up to third place and coolly defended the podium position from some aggressive attacks. With 15 laps to go, he moved up one more place to second and did all he could to catch the race leader and his Porsche brand team-mate in the turbulent closing phase. This second place, the third podium finish for ROWE RACING at Spa in the last four years, is a major success for the team from St. Ingbert, competing with three cars for the very first time.

Porsche works driver Romain Dumas from France and Sven Müller from Germany, alongside French Porsche Young Professional Mathieu Jaminet, finished fifth in the #98 Porsche 911 GT3 R, after losing a lot of ground due to the challenging weather conditions at the start of the race and slipping back to 61st out of 73 competing cars. The consistent and error-free performances of the German Porsche works driver Dirk Werner and the two Porsche Young Professionals, Dennis Olsen from Norway and Matt Campbell from Australia, led the #99 Porsche 911 GT3 R to seventh place and rounded off the superb team result.

Hans-Peter Naundorf, ROWE RACING team principal: “That is a fantastic result for everyone involved in this project, the drivers, the team and all the partners. We wanted to put on a better performance here but no one expected it to go as well as this. We put in an unprecedented performance in all respects, and I am incredibly proud of the three pro cars, all the driving crews and the mechanics. Marking just our fourth joint appearance by competing with three of our new Porsche 911 GT3 Rs at this, the greatest GT race in the world, was a huge task. But we proved most impressively that we have been one of the best endurance teams in Europe over the last five years. The weather conditions, the record-breaking heat followed by chaos in the rain, physically demanded everything from every single one of us. Staying in the hunt for victory right until the end of the race is a superb result for the team and everyone contributed to that.”

Frédéric Makowiecki, #998 ROWE RACING Porsche 911 GT3 R: “Of course, it is always difficult to come second, especially when the result is so close. But it is great to have achieved so much in our first joint project with the team. Now we have to come back even stronger next time. Many thanks to ROWE RACING. They made us feel very welcome and it was a very good experience.”

Patrick Pilet, #998 ROWE RACING Porsche 911 GT3 R: “That was a real rollercoaster ride today. We had great speed and it is a shame to miss out on victory after investing so much, buy we can be proud of what we have achieved and we will try again next time.”

Nick Tandy, #998 ROWE RACING Porsche 911 GT3 R: “What a fantastic result, that is the result of all the hard work that everyone in the team puts in on a daily basis. I am really happy. We gave it everything and our tactics were good. In the end, we only just missed out on the win.”

Mathieu Jaminet, #98 ROWE RACING Porsche 911 GT3 R: “I am proud of our team performance. Unfortunately, the mistake we made at the start of the race cost us some time. The chasing performance went well and we made it up to fifth place, but it might have been possible to do even better.”

Matt Campbell, #99 ROWE RACING Porsche 911 GT3 R: “That was a crazy race, a really tough race with weather conditions that were always changing. Unfortunately, there were too many yellow phases towards the end and we couldn’t make up any more places. But it was so much fun to drive here.” 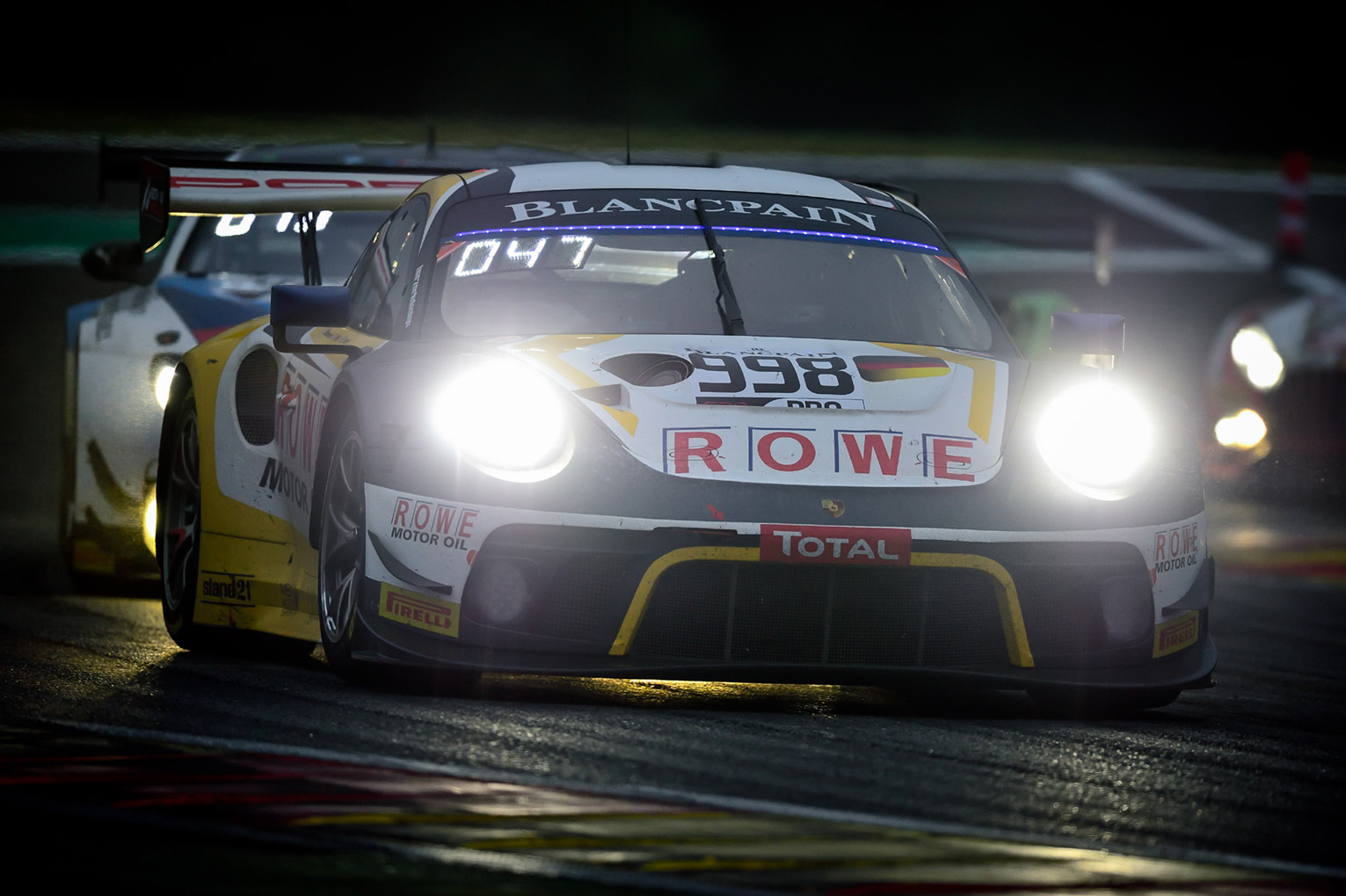 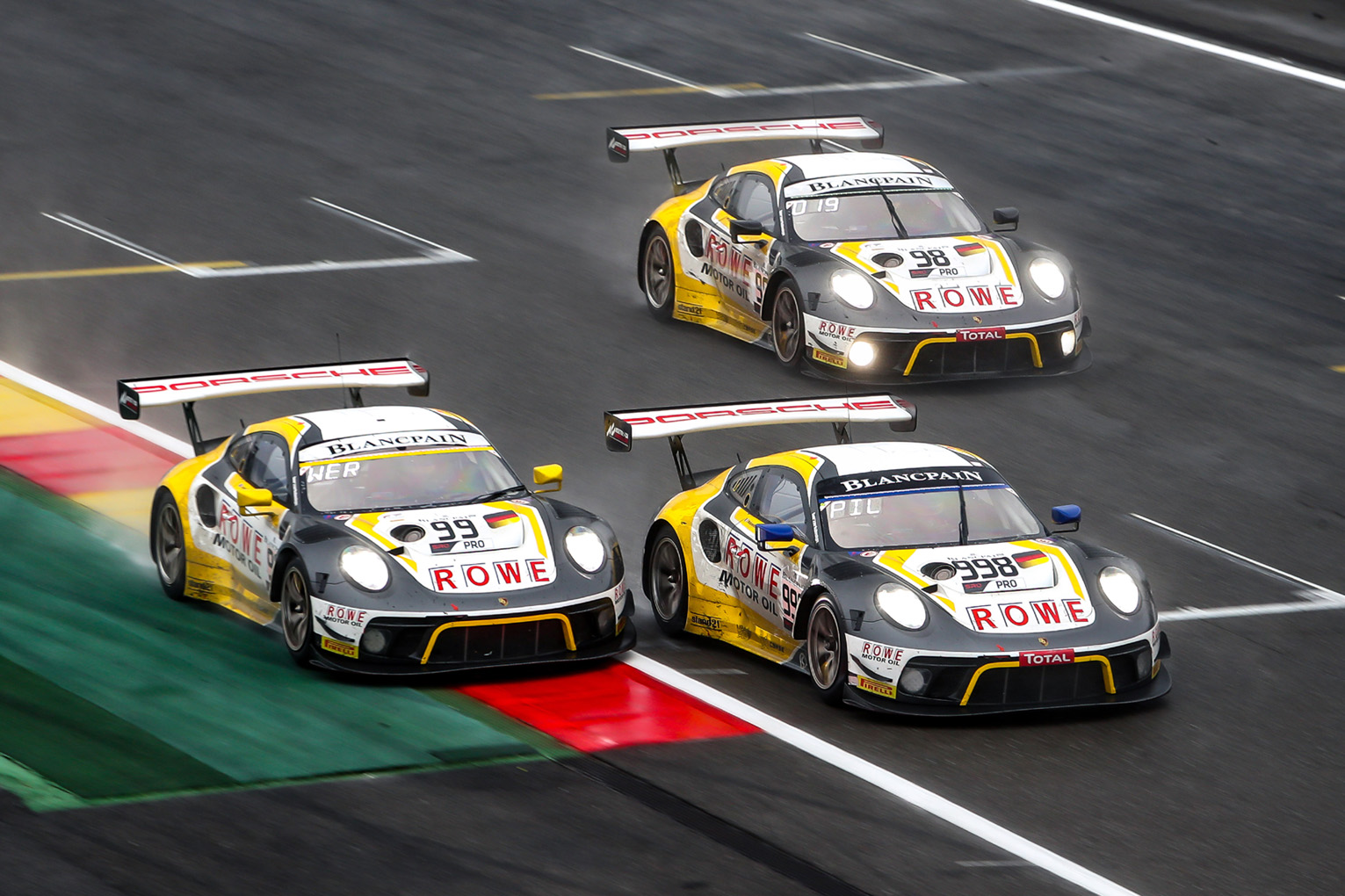 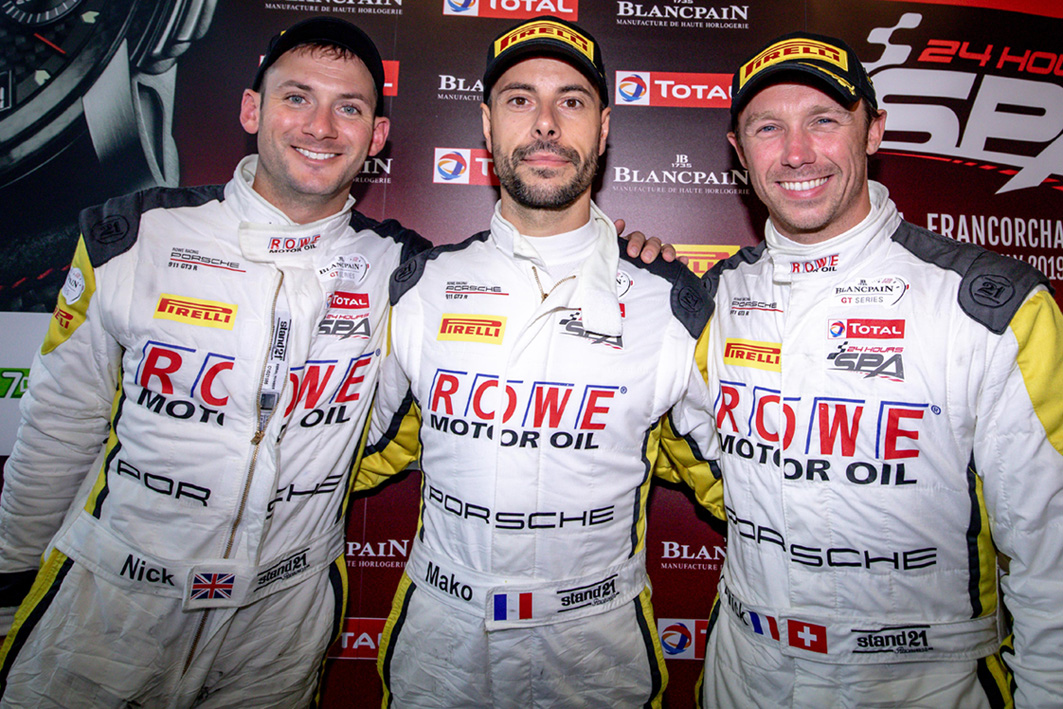