ROWE RACING looking forward to first highlight of the season: the 48th ADAC 24h race at the Nürburgring 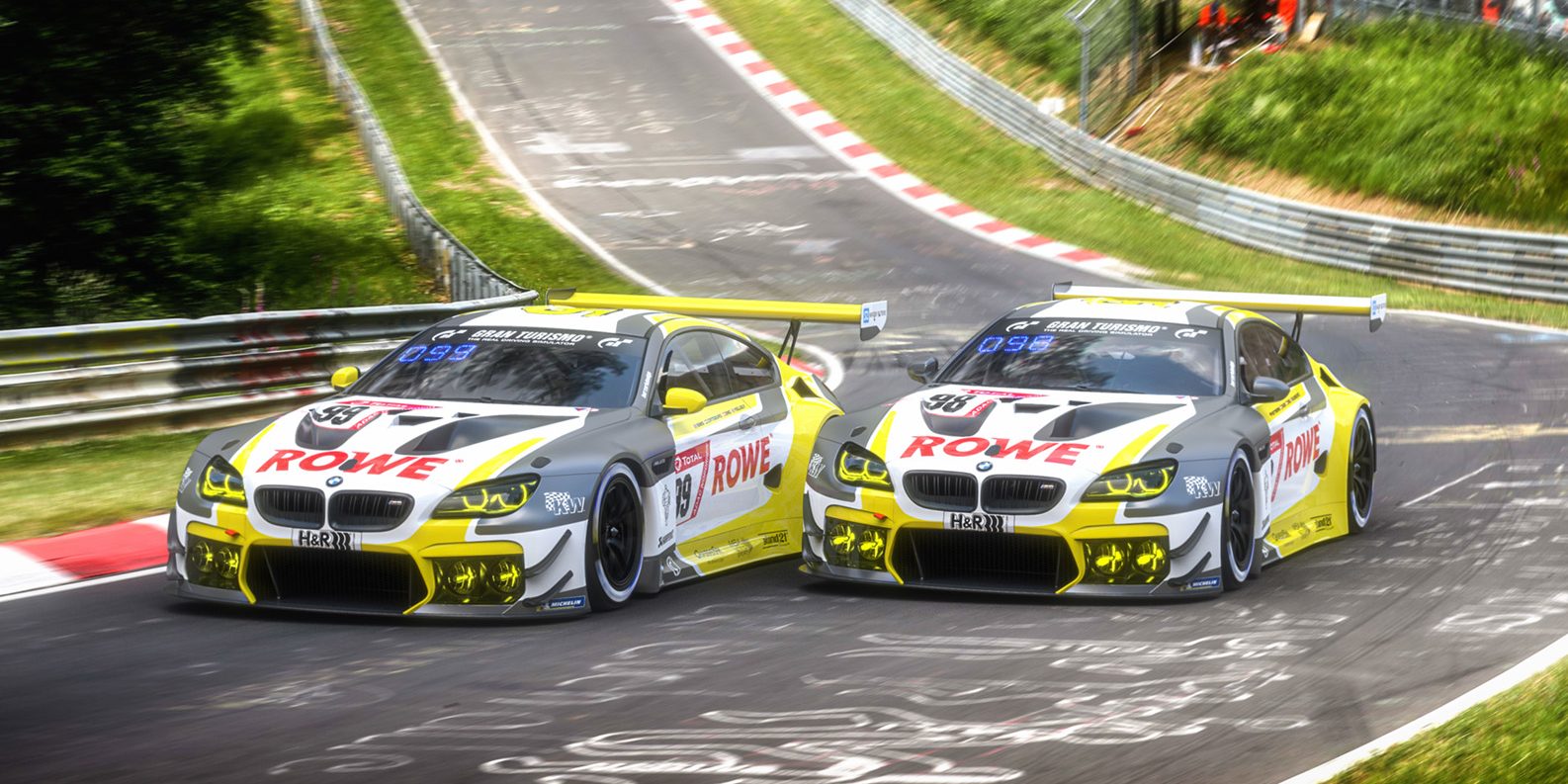 ROWE RACING looking forward to first highlight of the season: the 48th ADAC 24h race at the Nürburgring

St. Ingbert, 22nd September 2020 – Unusual conditions, a new date, but the same goal: ROWE RACING has its sights set on finally securing a spot on the podium in the 48th ADAC 24h race at the Nürburgring. This Saturday (26th September), the team from St. Ingbert will field two BMW M6 GT3s and a top-class squad of drivers in the iconic ‘Eifel marathon’, which takes place on the 25.278-kilometre combination of the Nordschleife and the Grand Prix Circuit. The 50th anniversary race has been delayed due to the COVID‑19 pandemic, meaning the field of over 100 cars will take to the track in the ‘Green Hell’ at the end of September for the first time.

At the wheel of the two ROWE RACING cars will be six current BMW works drivers and a former DTM racer. Austrian Philipp Eng, who will be in action in both BMW M6 GT3s, is particularly looking forward to the highlight of the season. At his premiere in running two cars Eng is reunited in the cockpit of the #99 car with Alexander Sims, with whom he won the 24 Hours of Spa for ROWE RACING in 2016. The British BMW works driver could not race in the Eifel last year, as he was otherwise engaged in Formula E. The quartet of drivers in the #99 car is completed by a further two BMW works drivers: Sims’ rapid compatriot Nick Yelloly and the ‘Flying Dutchman’ Nick Catsburg, who has claimed one victory for the St. Ingbert team in this season’s Nürburgring Endurance Series (NLS) and, with second place in 2017, was involved in the team’s best result in the ADAC 24h Race.

Philipp Eng heads a ‘DTM quartet’ in the #98 BMW M6 GT3. The Austrian is joined by his compatriot Lucas Auer, who is contesting the 24h race at the Nürburgring for the first time in his first DTM season as a BMW works driver. Like Eng and Auer, two-time DTM champion Marco Wittmann (Germany) is set for his third race weekend in a row at the Nürburgring, having tackled both the Grand Prix circuit and the sprint circuit in the DTM on the previous two weekends. This time, however, he must master the legendary Nordschleife. As he was last year, the fourth man in the #98 BMW M6 GT3 is former DTM driver Tom Blomqvist from Great Britain.

This year’s ADAC 24h race features a different Top Qualifying format. Before the familiar individual time trials, in which this year 18 cars will have two flying laps to secure pole position for the race, a new Top Qualifying 1 will see 19 cars do battle in identical conditions for the four remaining places in Top Qualifying 2. Following its good results in the NLS, ROWE RACING has already qualified with both cars for Top Qualifying 2, meaning they are already guaranteed the blue signal lights that, on a busy track, make lapping easier for the fastest GT3 cars – particularly at night. That means the team can use the practice and qualifying sessions to focus entirely on perfecting the set-up, while the drivers can familiarise themselves with the circuit.

The action at the ADAC 24h race at the Nürburgring, which was held for the first time in 1970, kicks off at lunchtime on Thursday (24th September) with the 90-minute first qualifying session from 12:30 to 14:00. The three-hour Qualifying 2 follows that evening, from 20:30 to 23:30. First on Friday (25th September) is the 60-minute Qualifying 3 from 13:25 to 14:25. That is followed at 17:50 by Top Qualifying 1. Immediately after that comes the battle for the prestigious pole position in Top Qualifying 2. On Saturday (26th September), the formation lap begins at 15:10, before the 48th ADAC 24h race gets underway at 15:30. The entire race, which finishes at about 15:30 on Sunday, will be broadcast live on television on the NITRO station. In accordance with the health and hygiene concept in place as a consequence of the COVID-19 pandemic, only a limited number of spectators are allowed in selected grandstands on the Grand Prix Circuit. Tickets can only be purchased online, are personalised, and are for allocated seats. Spectator areas on the Nordschleife are closed.

Hans-Peter Naundorf, Team Principal ROWE RACING: “We are pleased that this unique event is still able to take place this year, despite the peculiar circumstances and although it will be a very different occasion for everyone involved: with coronavirus requirements, the unusual date at the end of September, and without the support of the many fans on the Nordschleife. The approach will also be very different. More of the 24 hours will take place in the dark, and that will have an effect on the cars’ performance. The weather conditions are new for everyone. It could be cool and there could even be leaves on the track. We are really looking forward to the challenge and believe we are well prepared – particularly as we have analysed our early retirements in the past two years and have implemented measures to reduce the chances of this happening again to an absolute minimum. We can hardly wait to get going. We have a fantastic squad of drivers this year and are hoping to finally celebrate the major success in our fifth year with BMW. With two top driver line-ups in the BMW M6 GT3, we are spearheading BMW’s involvement and would love to present BMW with its 20th overall victory at the 50th anniversary of the race.”

Marco Wittmann, #98 ROWE RACING BMW M6 GT3: “For us as DTM drivers, naturally September is demanding with four race weekends in a row. Personally, I always try to use the Mondays and Tuesdays to recharge my batteries a bit. That works quite well for me, and as a racing driver your favourite place to be is behind the wheel anyway. I’m really looking forward to the 24h race.”

Lucas Auer, #98 ROWE RACING BMW M6 GT3: “I’m incredibly excited about my first 24h race at the Nordschleife but I’m also a little bit nervous if I’m being honest. The track is absolutely legendary. I can’t wait to get started.”

Philipp Eng, #98 und #99 ROWE RACING BMW M6 GT3: “I’m really looking forward to the 24h race and would like to thank BMW and ROWE RACING for placing their trust in me to drive in two cars. It will be my first time. On one hand it means more work and driving time, but on the other hand it means double the chance of a good result. I think that we’re well-prepared. Now it will be all about coming through well and not making any mistakes.”

Alexander Sims, #99 ROWE RACING BMW M6 GT3: “I’m really excited to be lining up in the 24h race at the Nürburgring again with ROWE RACING. I didn’t race last year so it feels like quite a long time – over two years – since I last did the race. However, it has only taken me two NLS races this year to get back in the groove and it is really, really enjoyable working with the whole team as always. None of us have experience of the 24h race at this time of the year. At the end of the day the same rules apply: the Nürburgring is a crazy circuit, and with so many different cars in the race there is no room for mistakes.” 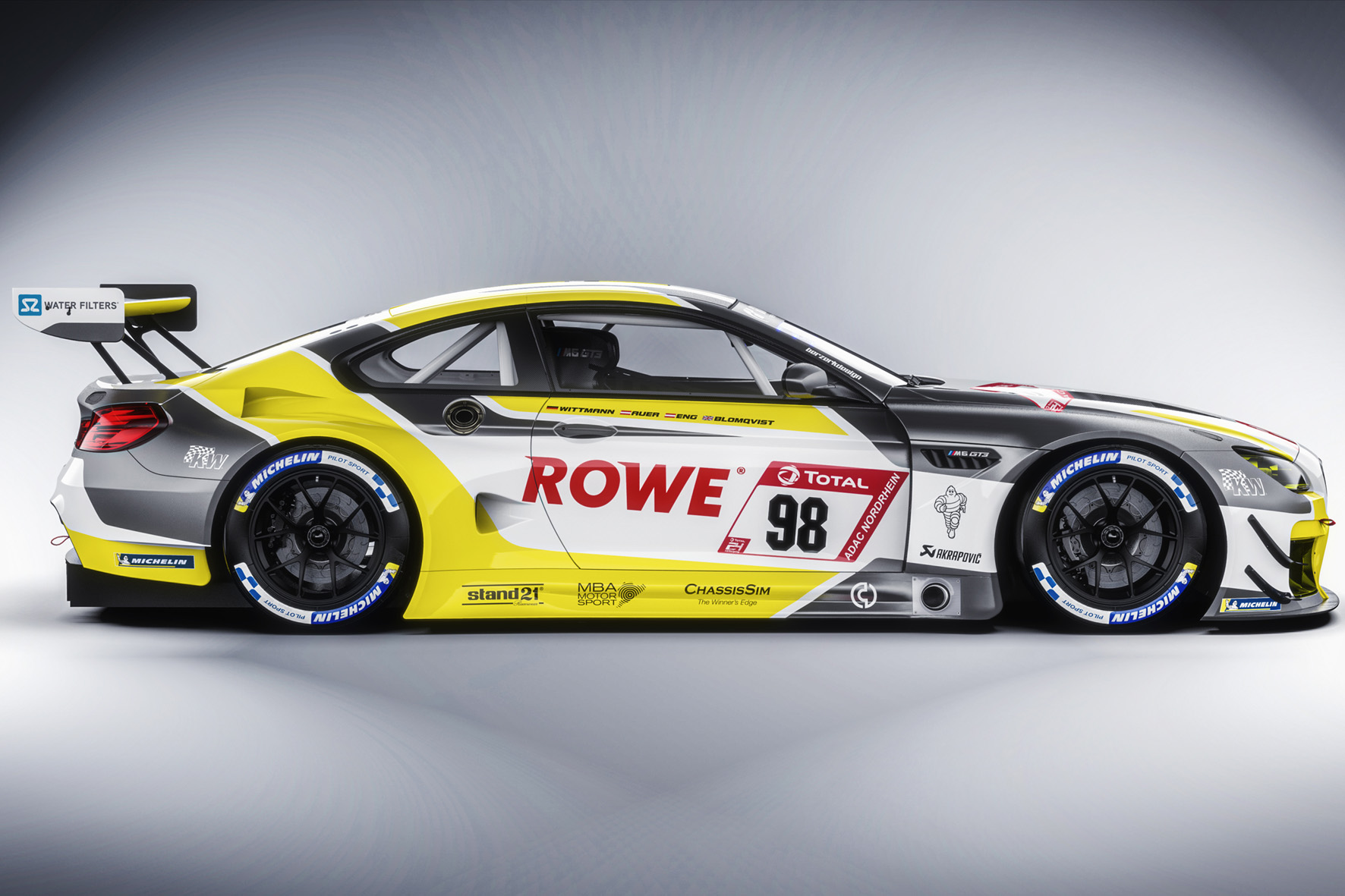 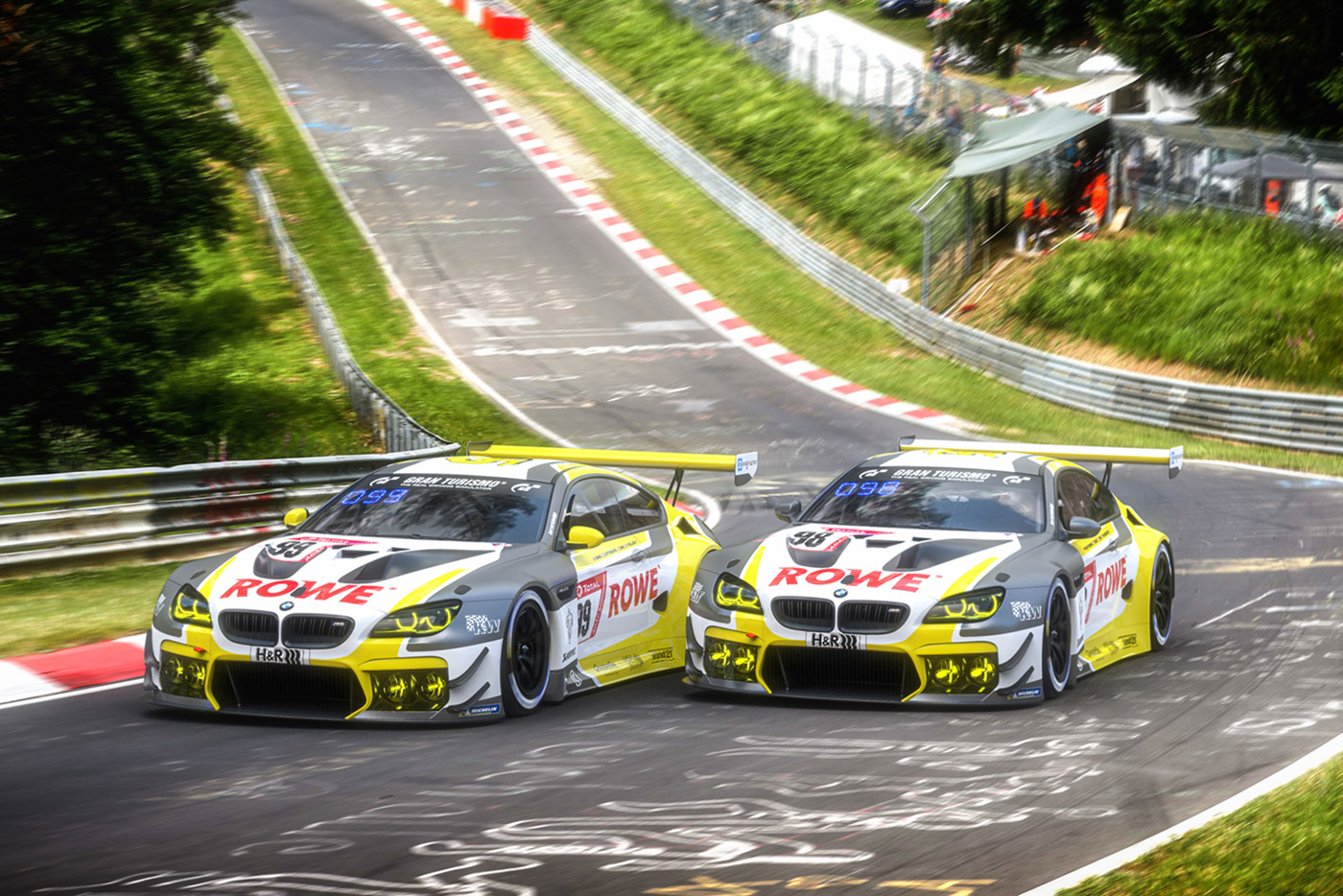 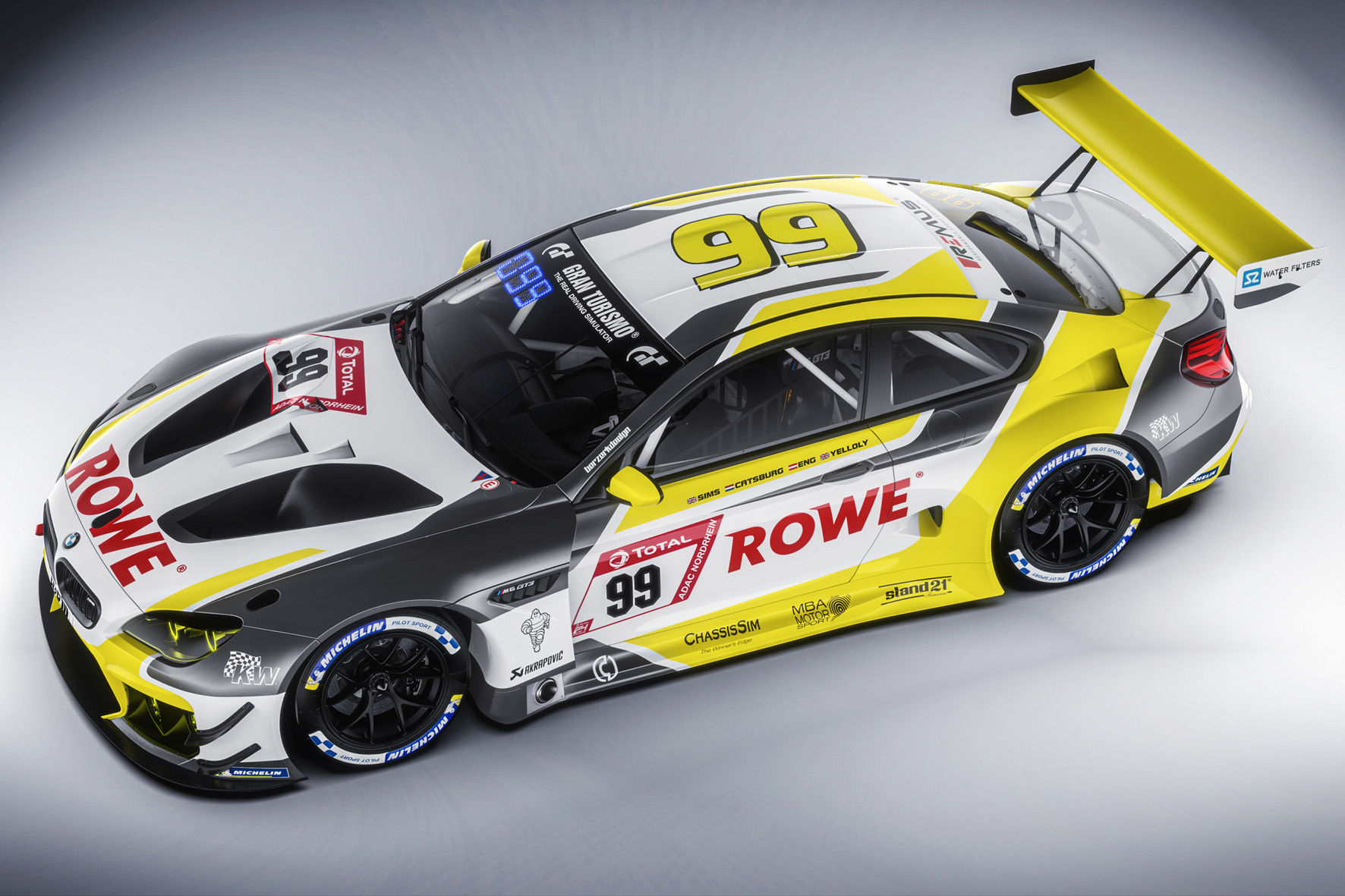