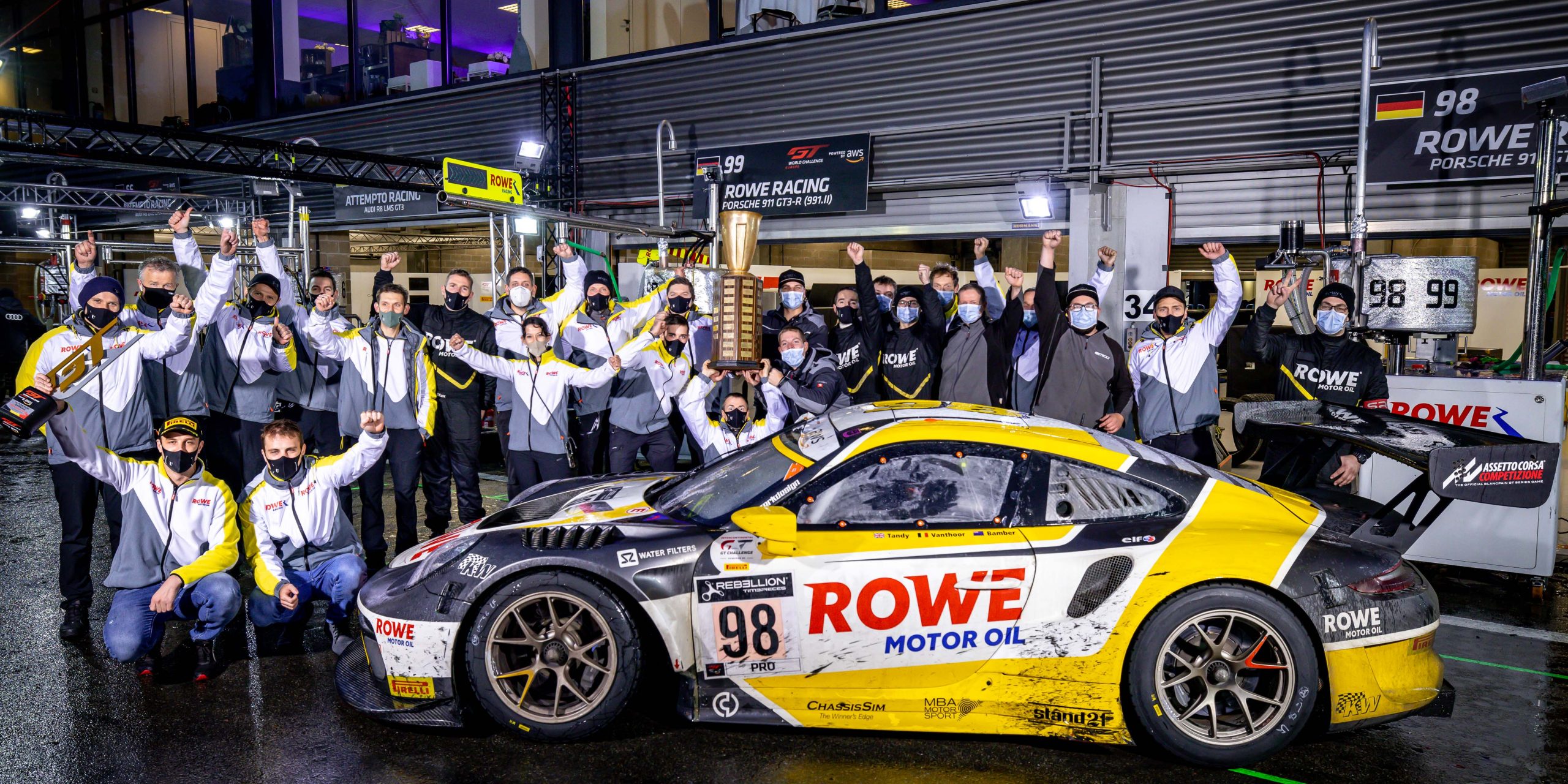 Unstoppable again in Belgium, four weeks after triumphing on the Nürburgring / The most successful team at Spa over the last five years celebrates a second win

St. Ingbert, 25th October 2020 – A dream driving trio, a perfect strategy and fantastic team spirit; four weeks after claiming victory in the 24h race on the Nürburgring, ROWE RACING has also triumphed at Spa to win the second major 24-hour race of the season. The three Porsche works drivers Nick Tandy from Great Britain, Earl Bamber from New Zealand and Laurens Vanthoor of Belgium came out on top in the #98 Porsche 911 GT3 R at the legendary rollercoaster circuit in the Ardennes, after a spectacular race with testing weather conditions and the longest night yet at this endurance classic. They secured a second win for the St. Ingbert team to go with the title from 2016, crossing the line 4.687 seconds ahead of the closest challenger. Together with the two second-place finishes in 2018 and 2019, this makes ROWE RACING the most successful team at Spa by far in the last five years, and also represents the eighth overall win in Belgium for Porsche. This was also the second title for local hero Laurens Vanthoor, who tasted victory in 2014.

The trio in the #98 car had to play a waiting game in the opening stage before making an impression during the night as the two Le Mans winners Nick Tandy and Earl Bamber both led the top-quality starting field of 56 GT3 cars for a time. After a brief night-time race interruption, the trio consistently maintained a position in reach of the podium on Sunday morning, before numerous incidents and safety car periods saw events take an unexpected turn in the final hours of the race. Nick Tandy drove at the absolute limit to deliver a number of dream laps that brought them closer to the leaders. On lap 497, he was able to react unbelievably swiftly to avoid an unplanned detour on the notorious Eau Rouge turn, a moment that also shocked team principal Hans-Peter Naundorf, watching the live stream of the event as he stayed at home to recuperate from recent illness.

Just six laps later, Nick Tandy received some decisive support from the team’s strategy department. First, they brought the #98 Porsche 911 GT3 R in for a fuel top-up during a full-course yellow period one hour and twelve minutes before the end of the race, but also chose not to put on new tyres, a decision that allowed the British driver to overtake one of two challenging Audis in the pits. Just two laps after that, the strategy experts called him back for another quick top-up, meeting the regulatory requirement for a pit stop within the final 65 minutes. That allowed Nick Tandy to overtake the second Audi and he entered the final spurt in first place, 61 minutes before the expiry of the 24 hours.

The British driver gave a commanding performance to defend his lead through two more restarts after safety car periods, only to be disturbed on the penultimate lap by some strange noises that could clearly be heard on the onboard camera. However, Nick Tandy applied all his experience to get the car over the finish line, taking the chequered flag for victory just 39 seconds after the 24-hour mark, having completed 527 laps and a total of 3692.108 kilometres. In pit lane, Nick Tandy took a deep breath and tapped the #98 Porsche 911 GT3 R on the roof before being embraced by team-mates Earl Bamber and Laurens Vanthoor.

Their team-mates in the #99 car did not enjoy such a successful race. The German Porsche works driver Dirk Werner, Porsche Young Professional Julien Andlauer from France and Austrian driver Klaus Bachler did reach tenth place for a time during the race, before being forced to retire due to damage caused by a collision after 495 laps.

Hans-Peter Naundorf, Team Principal ROWE RACING: “What a race and what a performance by the drivers and the whole team. I am just unbelievably proud of this team. Right from the start, the line-up with Nick Tandy, Earl Bamber and Laurens Vanthoor was what we wanted and they proved to be three real heroes. They didn’t make any errors, and unlike many other drivers they didn’t receive any penalties and didn’t slide off the track. They refused to give up after a somewhat disappointing qualifying session, they stayed calm and trusted the team implicitly. The team responded by making the correct strategic decisions at decisive moments. However, my heart nearly stopped on two occasions. The way that Nick Tandy managed to catch the car in Eau Rouge was incredible. And when I heard those noises on the last lap, I thought it was all over. But we did it in the end. Winning at Spa after victory on the Nürburgring is just a dream – and the perfect reward for all the hard work throughout the year.”

Nick Tandy, #98 ROWE RACING Porsche 911 GT3 R: “I’ll never forget this finale. Our victory was hanging by a thread when loud noises suddenly started coming from the rear of the vehicle in the penultimate lap. It almost sounded as if small bombs were exploding. I got a fright and at the same time, the rear axle was sliding around on a trail of oil. What I didn’t realise was that the oil was coming from our car. I still can’t quite believe that the Porsche 911 GT3 R got us over the finish line. The relief and joy are indescribable.”

Earl Bamber, #98 ROWE RACING Porsche 911 GT3 R: “It’s simply incredible. That was a real team effort. Everyone gave their utmost and never gave up. At the beginning, our chances didn’t look good but with tremendous determination we made it to the front. This victory feels just wonderful. We’ve experienced a lot of bad luck this year. The triumph at Spa helps us forget all about that. It’s a dream come true!”

Laurens Vanthoor, #98 ROWE RACING Porsche 911 GT3 R: “This brings me to tears. The 2020 year for us was often difficult because luck was never on our side. At some point, I’d almost written the season off in my mind. And then of all things to win at my home race in Spa-Francorchamps. I can’t describe the emotions. First I have to let it all sink in.” 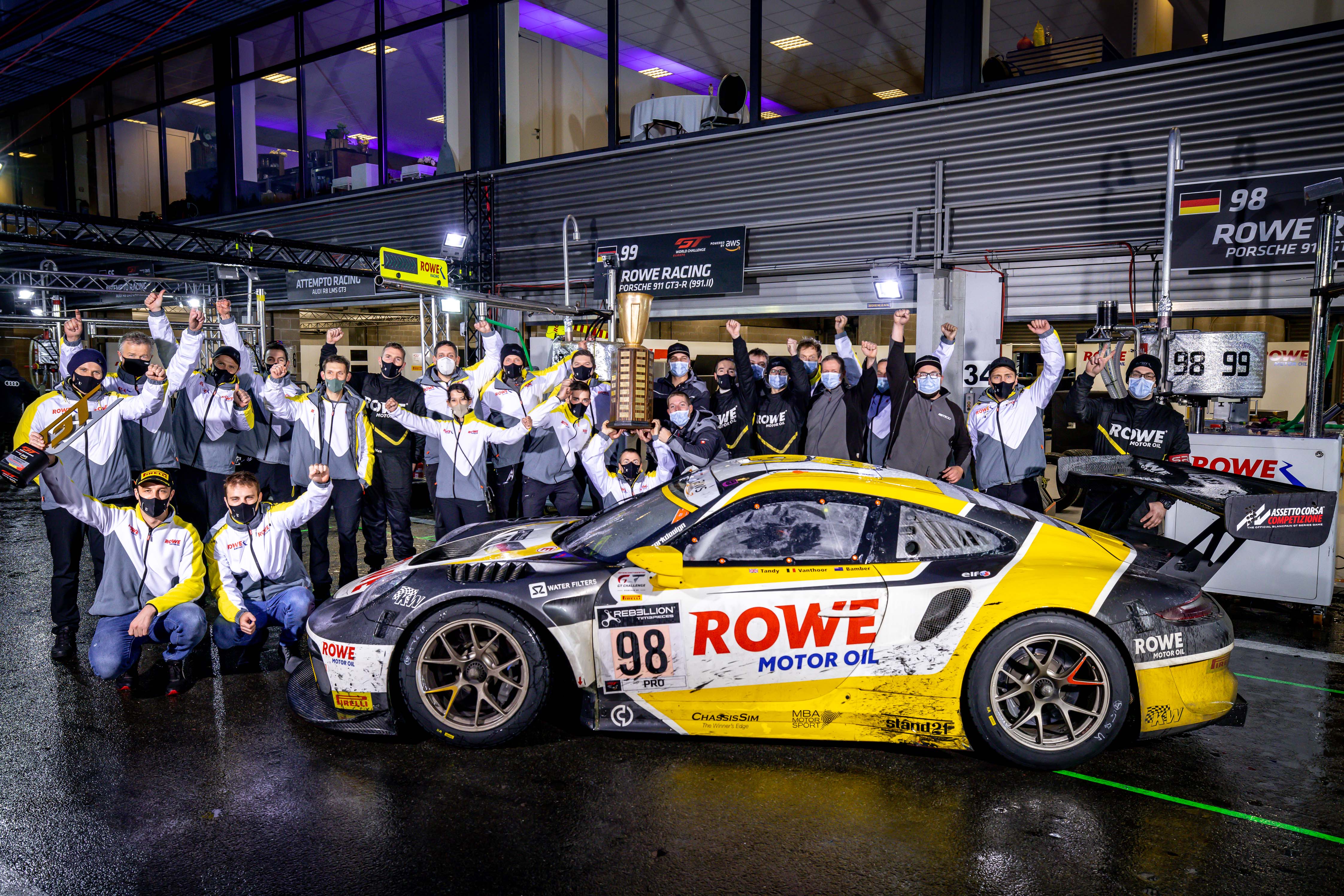 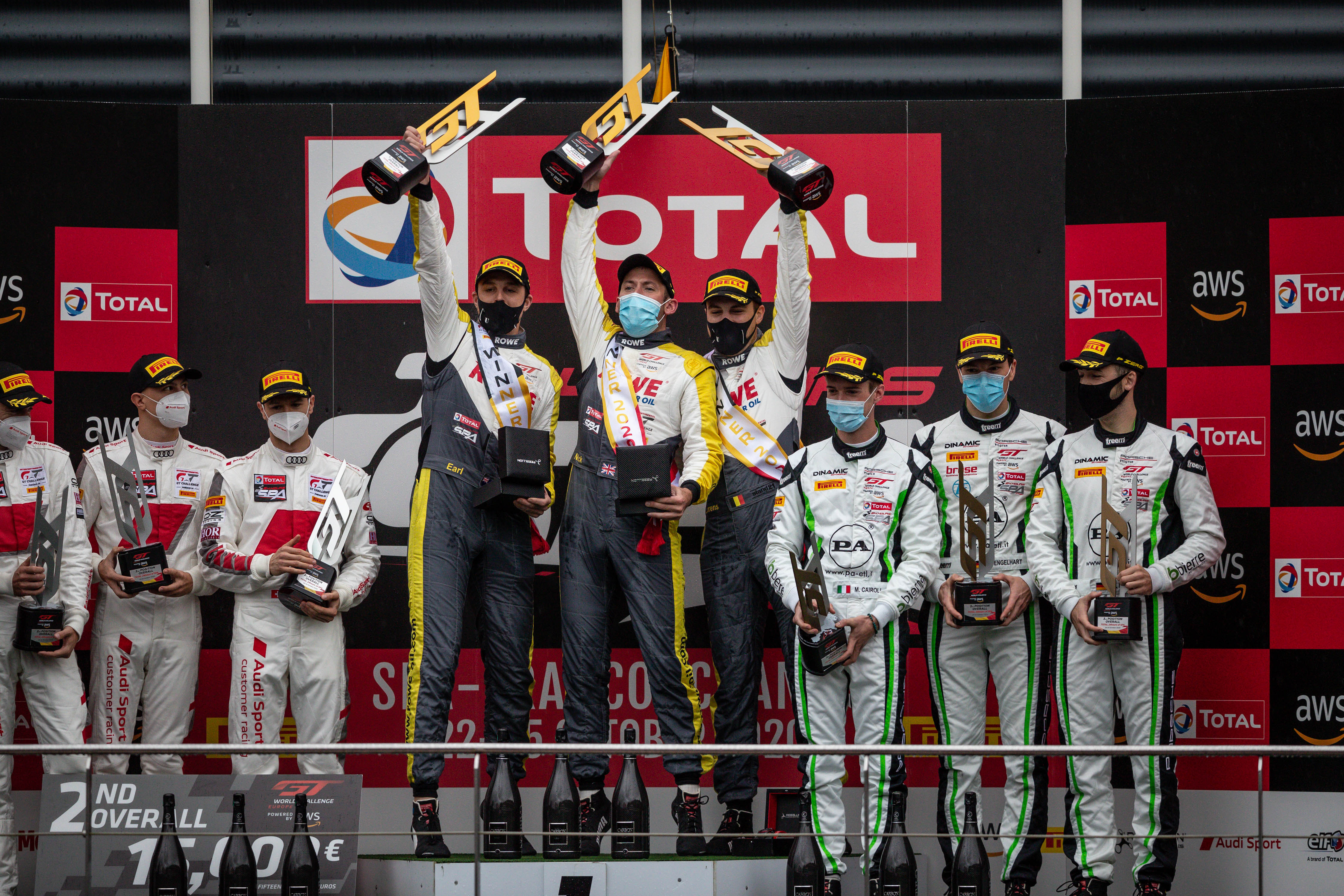 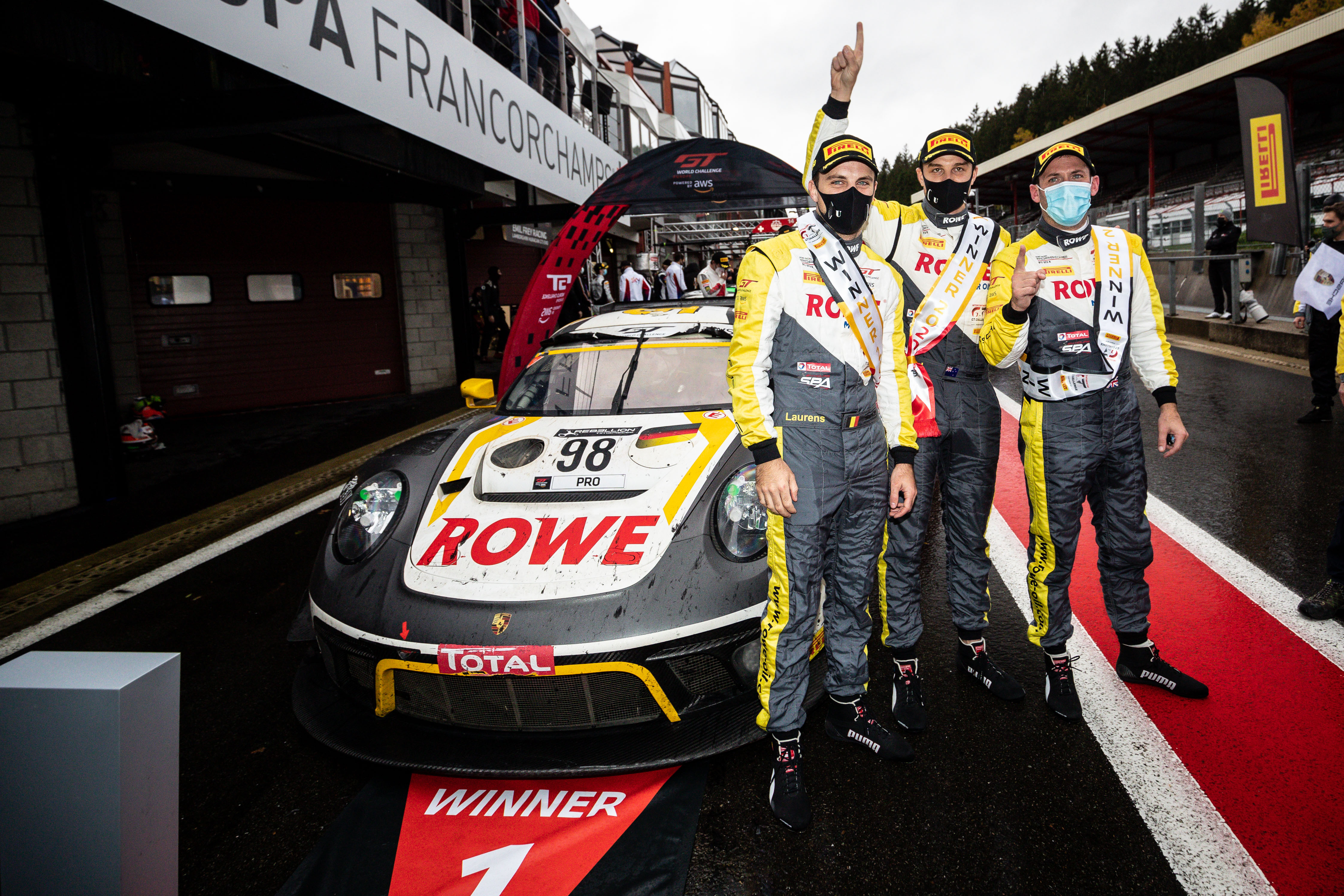