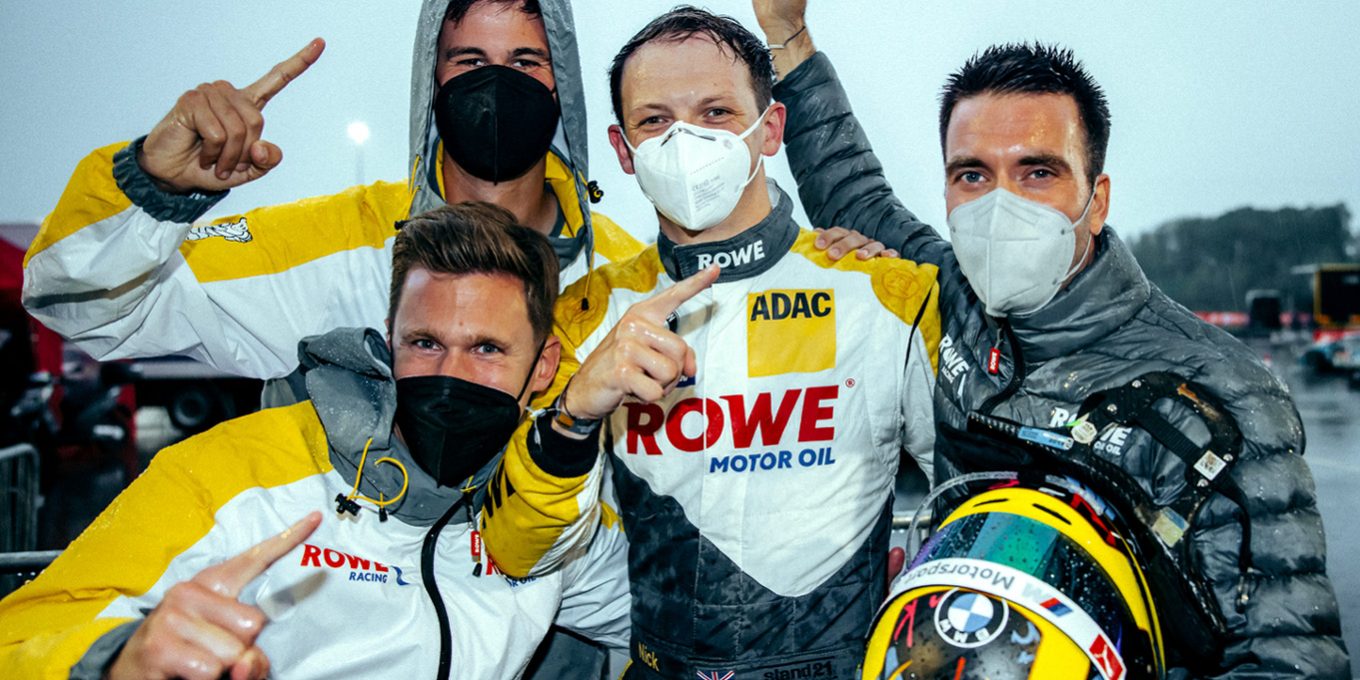 The dream continues. 250 days after the first win at the ADAC 24h race, ‘rain man’ Nick Yelloly delivered the first pole position for ROWE RACING at the legendary ‘Eifel Marathon’, in similarly torrential conditions. Last year’s winners in the #1 BMW M6 GT3 have thereby secured the best possible grid position for the race on Saturday afternoon, when ROWE RACING will attempt to be the first team for twelve years to repeat overall victory in the ‘Green Hell’. Nick Yelloly and Dutch driver Nick Catsburg, who rounded off last year’s triumph as the final driver, will be facing this challenge alongside ROWE RACING ‘institution’ Philipp Eng from Austria and BMW works driver John Edwards from the USA.

An intense downpour meant that the 25.378-kilometre combination of Grand Prix circuit and the legendary Nordschleife was soaking wet when the time came for two decisive laps of spectacular individual time trials in the battle for pole position in Top Qualifying 2. Nick Yelloly held his nerve, remaining cool to improve on a strong first lap that would have already secured him second place on the grid. On his second lap, the Brit clocked a time of 10:01.619 minutes to finish 2.308 seconds ahead of the Lamborghini that had been in the lead. His reward will be to receive the Glickenhaus Trophy around 45 minutes before the start of the race. This trophy has been presented to the fastest driver in the final qualifying session since 2016.

The team’s #98 car will then begin the chase from 25th on the grid, having missed out on one of the four spots available in Top Qualifying 2 during session 1. In this BMW M6 GT3, the two former DTM champions from Germany, Marco Wittmann and Martin Tomczyk, will share driving duties with their BMW works driver team-mates Connor De Phillippi from the USA and the South African Sheldon van der Linde, who will be sporting the colours of ROWE RACING in this year’s DTM. The #98 car secured fourth place last year.

The countdown to the race starts on Saturday afternoon with the warm-up lap at 15:10, before the race begins at 15:30. The entire race, all the way to the chequered flag at around 15:30 on Sunday, will be broadcast live on the NITRO TV channel and on the live stream on the homepage of the organizers.

Hans-Peter Naundorf, Team Principal ROWE RACING: “I am simply speechless. If you had said to me beforehand that we would follow up last year’s win with our first ever pole position, I would have said you were mad. Nick Yelloly clearly found a quicker line through the water than any of his competitors. It was fascinating to see the level of performance he got out of the car on those two laps. That was a superb display.”

Nick Yelloly, #1 ROWE RACING BMW M6 GT3: “That was anything but easy. In fact, it was totally mad. There was aquaplaning everywhere. But I’m British, so I’m used to these weather conditions. The team put in some unbelievable effort. That is my first pole position here and I am really proud of it. We will be starting right where left off last year.”