Mega success for ROWE RACING: Back on the podium after finishing second at the ADAC 24h race 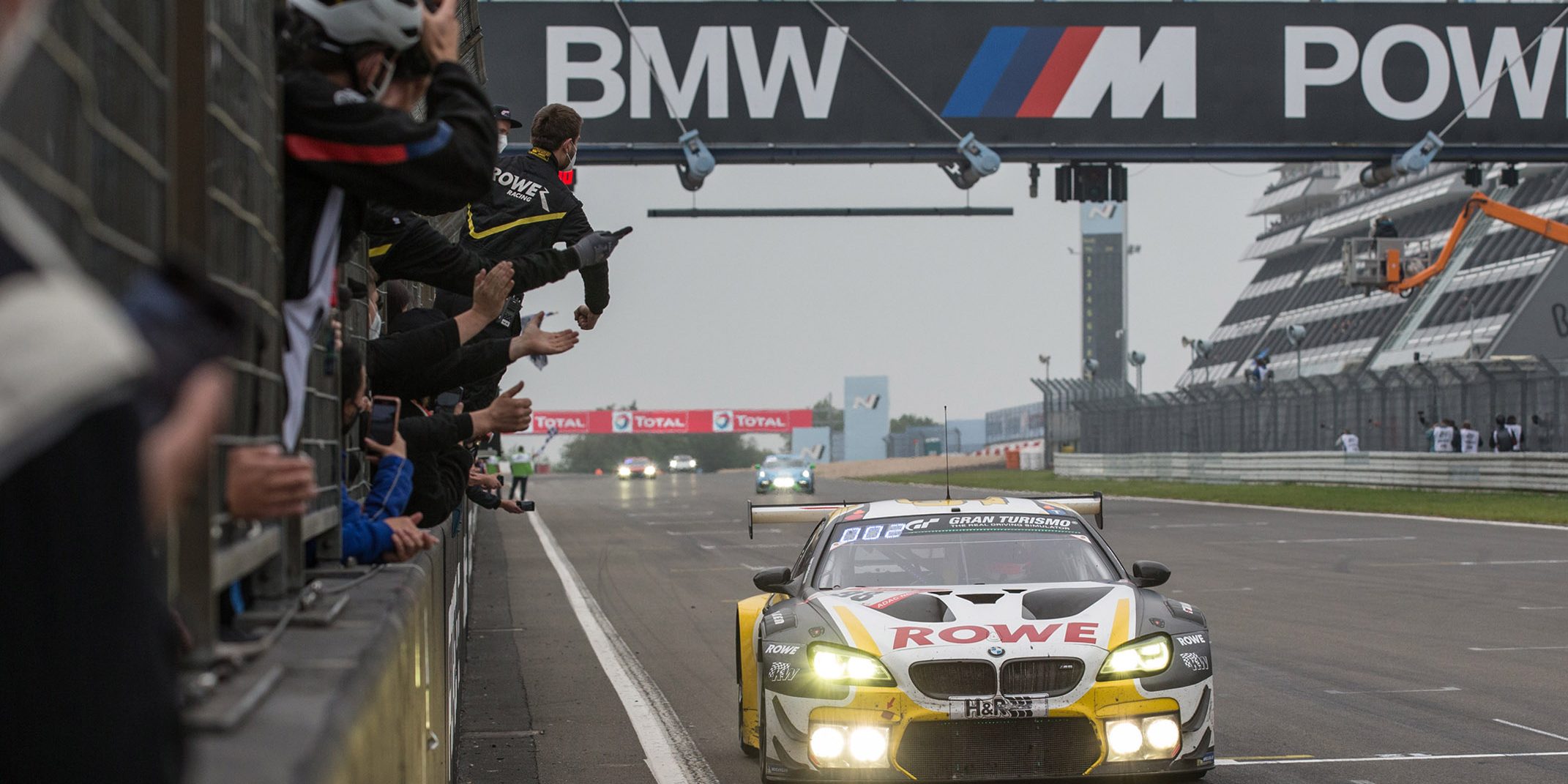 Mega success for ROWE RACING: Back on the podium after finishing second at the ADAC 24h race

Just 8.8 seconds away from repeat triumph in the ‘Green Hell’ / Last year’s winner sporting #1 retired due to a defect

A fantastic team performance saw ROWE RACING reach the podium for the second time in two years at the legendary ADAC 24h race on the Nürburgring. In the 49th edition of the ‘Eifel Marathon’, which became an ‘Eifel Sprint’ due to a 14.5-hour stoppage for fog, the St. Ingbert team followed up last year’s triumph and the first pole position for ‘rain man’ Nick Yelloly from Great Britain in the #1 BMW M6 GT3 by finishing second this time. At the end, the BMW M6 GT3 with the two former DTM champions from Germany, Marco Wittmann and Martin Tomczyk, their fellow BMW works drivers Connor De Phillippi from the USA and the South African Sheldon van der Linde, who will be sporting ROWE RACING colours in this year’s DTM, only missed out on victory by 8.8 seconds.

The endurance specialists from St. Ingbert have now reached the podium four times in a row at the two major 24‑hour classics at the Nürburgring and Spa, and they were not fazed as the ADAC 24h race 2021 became the shortest in the 51‑year history of the event. The six-hour ‘canter’ to the red flag at 21:29 on Saturday evening was followed by a 3.5‑hour sprint from midday on Sunday. The field only completed 59 laps and 1,497.302 kilometres, fewer than ever before.

Martin Tomczyk gave a sparkling performance in the first half of the race, catapulting the #98 car from 25th on the grid up to fourth place in just six laps and maintaining a position in the leading group during the first torrential downpours. After the first changeover to Connor De Phillippi, #98 swapped the lead several times with the team’s #1 car, where BMW works driver John Edwards from the USA had replaced starting driver Nick Catsburg. The Dutchman had started the race from pole position and was the first leader around the Nordschleife. The fog thickened as the evening progressed, leading to the race being stopped.

It was only possible to continue at around midday on Sunday. Austrian driver Philipp Eng held the lead for five laps after the restart but then fell back through the tightly-packed field after his first pit stop. Shortly thereafter, he was forced to park the winning car from last year in the pits due to a technical defect. For the remainder of the race, Sheldon van der Linde was involved in a compelling duel with the #911 Porsche, before the final pit stop handed the advantage to ‘Grello’. Although Sheldon van der Linde continued to battle until the final metre, he ended up just 8.8 seconds away from the win – the second-closest finish in the history of the ADAC 24h race.

Hans-Peter Naundorf, ROWE RACING team principal: “Reaching the podium again here at this circuit and in these difficult conditions represents an amazingly good performance from our drivers and the entire team. Pole position on Friday evening after an outstanding drive by Nick Yelloly in the #1 car was another highlight in the history of ROWE RACING. Standing on the podium again with the #98 car makes me incredibly proud. Finishing first or second in four consecutive 24‑hour races is simply unbelievable, especially as the conditions here at the Nürburgring were once again extremely challenging – especially in the opening stage. However, it was Martin Tomczyk who laid the foundations for success as he moved up from 25th position to fourth. It was sensational – like seeing the rain god walking on water. Sheldon van der Linde was in the car for nearly three hours at the end and he applied some great pressure. The race was just a bit too short for us. We might have been able to achieve more over the full distance. The #1 car also gave a great performance but unfortunately a technical defect ended its race. But the race stoppage was absolutely correct. We just didn’t get that last little bit of luck at the end, but overall that was a fantastic performance.”

Markus Flasch, CEO BMW M GmbH: “What a race for the BMW M Motorsport family! We are delighted with this second place for the BMW M6 GT3 and the ROWE RACING team. Congratulations to the team and the drivers of the #98 car. They showed how strong the BMW M6 GT3 remains, even at this age, and that it can still battle for victory. Unfortunately, their team-mates endured some bad luck with the #1 car and had been among the favourites to win the race.”

Martin Tomczyk, #98 ROWE RACING BMW M6 GT3: “Second place means a lot to me. Of course it is a shame to just miss out on the win like that but it is always a special feeling to stand on the podium at the 24h race. It is also a great accolade for the team. After qualifying, we would never have expected to move to the front so quickly during the race. The ROWE RACING team, BMW M Motorsport and my three fellow drivers all put so much work into this race. We have been rewarded for that. It was so much fun. A great result, and one that I was not really expecting.”

Sheldon van der Linde, #98 ROWE RACING BMW M6 GT3: “Considering our grid position, that is an unbelievable result. I could see the Manthey Porsche on Döttinger Höhe. It was so tight. Of course, it does hurt a little but we really should not be disappointed. My triple stint at the end was not half bad, I really gave it everything. But it was not to be. Congratulations to Manthey, they earned the win.”

Marco Wittmann, #98 ROWE RACING BMW M6 GT3: “In the end, we can be very pleased with that second place, even though it is a little disappointing to finish not even ten seconds behind the winners. When we started from 25th on the grid on Saturday, we had no expectation of finishing the race on the podium. It was Martin Tomczyk who put us in this position with his unbelievable opening double stint. In general, we worked really well as a team. That is my first podium at a 24‑hour race. I am really pleased with that.”

Connor De Phillippi, #98 ROWE RACING BMW M6 GT3: “I am grateful for having been part of such a great team. I think our car had the potential to win but the conditions were unbelievably tough at times. In the end, luck was not entirely on our side but I am sure we will get another chance.”

Philipp Eng, #1 ROWE RACING BMW M6 GT3: “We were doing really well. Our starting drivers in particular, Nick and Martin in the other car, did a phenomenal job of keeping the cars on the track during this difficult stage. Unfortunately, the red flag with the new regulation for the time required for a pit stop did not help us at all. We had to stay there for an unbelievably long time and then we knew we would have to drive right on the limit. I don’t think we have often pushed as hard on the Nordschleife as we did today, but then we had a technical issue. I no longer had full power and had to retire the car.”