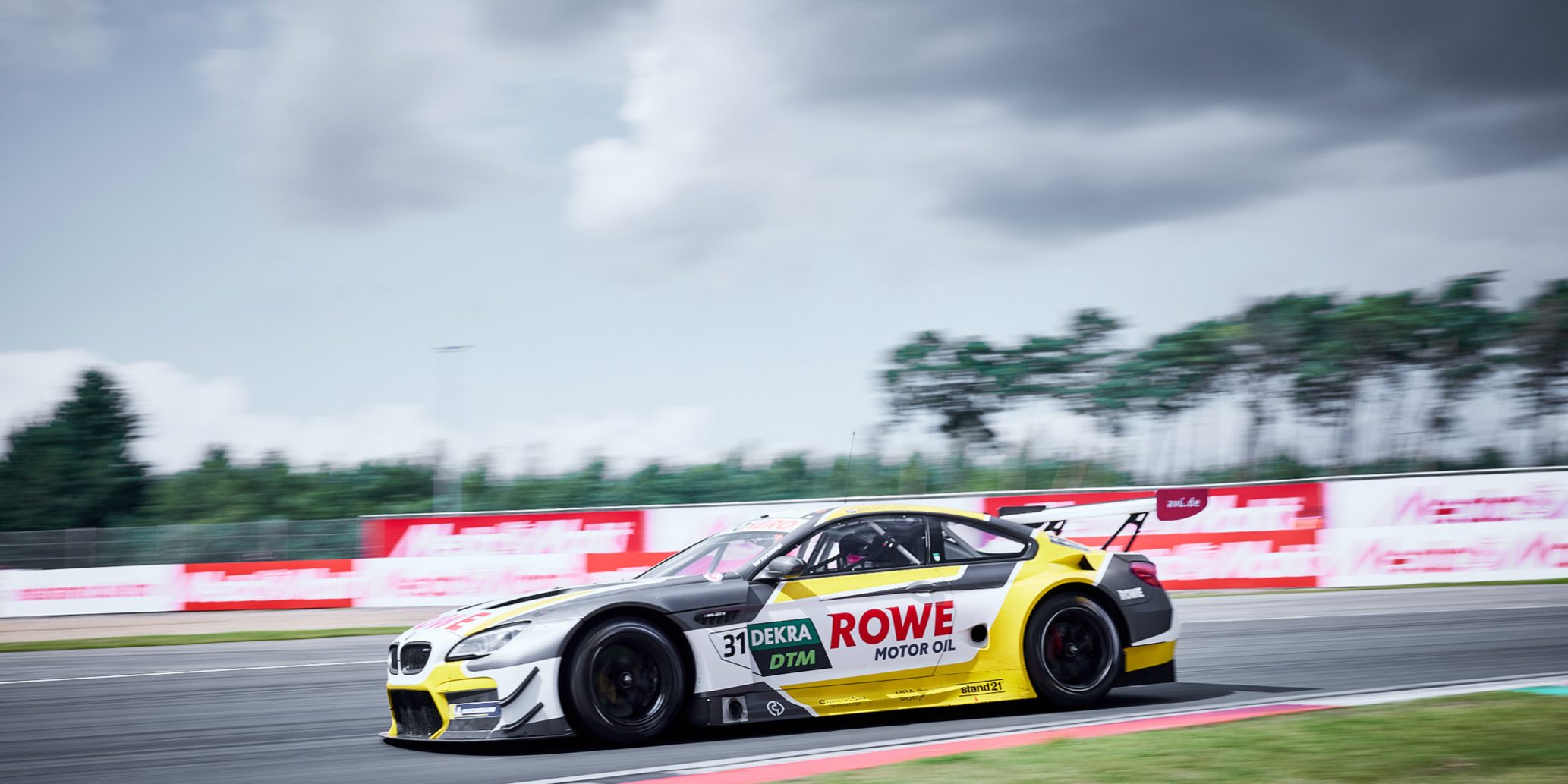 The trip to Zolder once again proved to be a fairly fruitless one for ROWE RACING. As in 2017 in the Blancpain GT Series, the team from St. Ingbert endured a difficult weekend as the iconic Belgian circuit hosted round three of the DTM season. ROWE RACING emerged from Saturday’s opening race empty-handed as Timo Glock finished eleventh after a disappointing qualifying in the #16 BMW M6 GT3 and Sheldon van der Linde was classified 16th in the #31 BMW M6 GT3 after two time‑penalties.

Race two on Sunday was influenced by an unfortunate qualifying session, in which Timo Glock came to a standstill through no fault of his own and caused the session to be suspended. The former Formula 1 driver consequently had to start from the back of the grid. Meanwhile, Sheldon van der Linde started from down in 16th place. The South African launched an impressive fightback and climbed into seventh place. Timo Glock was spun by a rival car in the closing stages and crossed the finish line in 16th place. The next races take place in two weeks’ time (21st/22nd August) at the Nürburgring.

Timo Glock had a disappointing qualifying, in which he was unable to get in a flying lap without traffic. As a result, he started the race from 20th place on the grid, from where he launched something of a fightback. After a good start and a crash on the opening lap, which took three of his rivals out of the race, he found himself as high as 14th after lap one. Following his pit stop, the former Formula 1 driver lay 15th for a long time, before making more progress through the field in the closing stages. In the end, he crossed the finish line twelfth. He was then promoted to eleventh in the final classifications after Sheldon van der Linde’s time penalties.

Sheldon van der Linde benefitted from the crash on lap one and initially slotted into ninth place. Once the majority of tyre changes had been completed, he found himself 13th. However, his race was then affected by two time‑penalties. He first received a five‑second penalty at the re‑start after the first safety car period for pulling out of the two-row formation at the flying re-start before crossing the finish line. Later in the race, the stewards punished him for a false start at the start of the race itself. Sheldon van der Linde was handed a drive‑through penalty towards the end of the race, which was automatically converted into a 30‑second penalty after the finish. That saw the South African drop from eleventh to 16th place.

Sunday’s qualifying was extremely unfortunate for ROWE RACING. After the bonnet had flipped open and damaged the front splitter on Timo Glock’s first flying lap, he then rolled to a standstill with a damaged drive shaft on his second attempt. As that resulted in qualifying being brought to a premature end, Sheldon van der Linde was unable to improve his time and had to settle for 16th on the grid. Timo Glock started from 19th.

Sheldon van der Linde dropped back to 17th place at the start, but then stayed out on the track for a long time after an early safety car period. That saw him running first for a while. After his late pit stop, he re-joined the race in eighth place and ultimately finished seventh to score six points in the Drivers’ Championship. He now lies tenth in the overall standings with 34 points. Timo Glock was spun by a rival in the closing stages of what had been a tough race for him, and crossed the finish line in 17th place. After a penalty for the driver who caused that collision, Timo Glock was promoted to 16th.

Hans-Peter Naundorf, Team Principal ROWE RACING: “Zolder has been a difficult venue for us as a team, as the racetrack really put the team, drivers and cars through the wringer. We had damage to the cars and technical issues, which affected us on Friday and Saturday. Only after the very unfortunate qualifying on Sunday did we find the right pace with Sheldon’s car, and he managed to pick up a few points for the team, thanks to a fantastic performance and a good strategy. Timo’s car picked up a few bits of damage in qualifying, which we will examine closely again when we get home.”

Timo Glock, #16 ROWE RACING BMW M6 GT3: “That was a weekend to forget for me. Unfortunately, we had technical issues on both days. We had even more on Sunday, when first the bonnet flipped open in qualifying. The front splitter received quite a blow as a result. On my second attempt, the drive shaft broke and I could do nothing but roll to a standstill. The team did manage to repair the car by the start of the race, but the performance was not there. We must now look ahead and bounce back at the Nürburgring.”

Sheldon van der Linde, #31 ROWE RACING BMW M6 GT3: “I have mixed feelings about this weekend. I believe we deserved to score a few more points. However, after the unfortunate qualifying on Sunday, it was just about fighting our way into the points. We managed that, because the car was very good. However, when you see how fast Marco Wittmann was, we should also have been right up there, maybe not looking at a victory, but definitely a few more points towards the championship.”